Contributed by sickboi, Posted by Brian Shultz Side One Dummy Interviews 16 years ago

Sickboi recently took the time to rewind with VCR. I'll let him take it from here.

I recently had the chance to ask recent SideOneDummy signees and self-proclaimed "funcore" pioneers VCR a few shitty questions of my own, and some lame-ass shit you wanted to know. Read below to find out some nerdy technical stuff, what they like about North Carolina, and what they think of being interviewed by a "fucking close-minded homo," if you have nothing better to do. 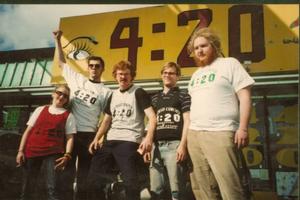 For those unfamiliar, describe VCR's sound and attitude.

CM: We have a rock band with too many keyboards and no guitar. We like fun.

Unlike a lot of your "electronic/punk contemporaries," you seem to generate a sound more hardcore/punk-influenced than new-wave; where does this come from?

CT: We don't want to sound wussy. I was never into punk/hardcore in my more impressionable days. Rap only.

CM: Most of the band has a high school punk-influenced past, and we don't dress sharp enough to have a cold and modern sound.

You were just recently signed to SideOneDummy, how'd it happen? (Theyâre a pretty big label)

CT: I don't know, but they got that sideonemoney.

CM: They heard our cruddy EP and it blew their minds.

How's the album coming? Can we expect anything different from the EP? 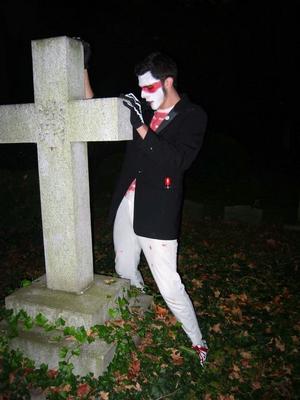 Richmond seems to have a pretty big influence on the lyrics of bands from here; how much does it impact your songwriting?

CM: Richmond has slimed its way in just a pinch. It's a magical yet totally busted place.

Do you see electronic/punk music becoming the next TRL fad (Ã¡ la pop-punk, emo and screamo)? If so, how would you react to seeing VCR videos on the countdown?

CT: I do, because we have to be on top of that shit. Nothing would make me mo stoked than a video on the TRL countdown.

CM: I don't see it happening, but who cares about stupid TRL shit?

Any major upcoming tours? With who?

CM: Sure, with some dudes.

Favorite (non-hometown) city to play? Why?

CM: I don't know, somewhere wasted in Germany. I also fancy North Carolina because people were nice or people responded.

If VCR was going to do the opening music for a television show (past or present), which show and why?

CT: Obviously "The OC" for obvious reasons. Or "MacGyver" because that would be sweet.

CM: "Everybody Loves Raymond," because no one does.

Some user questions:
I'd like to know what sort of equipment/software/hardware that they use to produce their sound.

CT: We write songs on reason. We use: sequential circuits prophet 600, Roland Juno 106, Korg Microkorg, Roland Alpha Juno 1, and some bass and some drum set.

CM: We use Reason to write on, along with some of our own sampled sounds. Then we use a variety of fairly medium grade keyboards.

CT: Iâm going to say it's because with the cooked chicken, you could cut them all up and put it all in a box or something, so it's like a mass of one object, whereas when they're alive, you don't so much see product, you see little individual entities.

CM: Because you like Mitch Hedberg (RIP, Interview done prior to his passing). 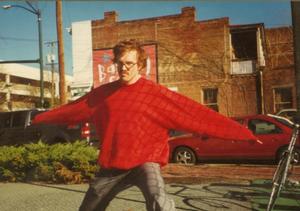 Why must you throw cereal and huge letters at us?!?

CT: Throwing stuff is the shit. Have you seen this Redman video where they're throwing cereal? Itâs tight. Yo, and I said we listen to rap. Rappers will dump a case of Dasani on a crowd faster than you would believe.

CM: Because it is light-hearted and non-threatening.

Are they stoked that the movie "First Kid" starring Sinbad was shot in Richmond?

CT: Two of us were extras in that movie and I totally saw Sinbad from like 25 feet away.

CM: We are very stoked. But then sadly the kid in the movie was shot in Richmond, with a gun.

CM: â¦is planning to do a split with us.

CT: Iâve never heard 7 Seconds and I don't know what's going on in punk. I think there needs to be more money for the sciences, and I don't mean engineering. Most music just sounds watered down. Thereâs a couple of hot new 50 songs. Sometimes I think shit's about to hit the fan, though. Every motherfucker has a computer, and one of the major reasons we're a slightly successful band is due to that piece of equipment. People who can't hear a song in their head can now toggle through a billion melodies and harmonies and hear them and make smart decisions about their direction. There will be many more bands who use this format in the future. Itâs just too efficient not to things this way. What pisses me off about the world of music is cigarettes.

CM: 7 Seconds got in there with the red balloons cover, and me hearing it performed by D.C. straightedge legends Battery. They influenced me in high school and so did various other D.C. bands. The current state of punk is that it has mutated so goddamn much that it isn't safe to call new music punk anymore. It's now screamo and power violence and electroclash and the like. I still call it rock. Everything is constantly changing in the world and this is a heavy-handed question. 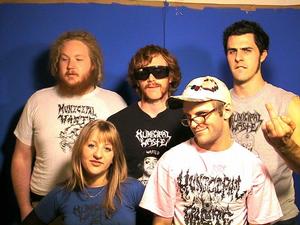 If someone killed one of your members, would seek the death penalty or life imprisonment?

CM: I would seek the killer myself, to kill them.

And the final user question:
How does it feel to know that the guy interviewing you at this very moment is a fucking asshole that bashes anything but Hatebreed because he's a fucking jock? Are you guys as close-minded as this fucking homo?

CT: If he's a gay jock, then that's pretty cool. Itâs also cool that you asked this question. Uh, I guess it doesn't feel like anything. I don't know who Hatebreed is.

CM: I would say shut [it] you stupid internet dork kid.

Thanks for your time!