Tom Gabel of Against Me! 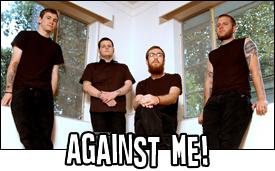 Community member Sceneupdates had a chat with Tom Gabel of now-controversial act Against Me!. The two exchanged emails and covered topics from the recent signing to Sire, their involvement with various charity projects and Tom's favorite music of last year.

Tom, Warren, James and Andrew released Searching For A Former Clarity on Fat Wreck Chords last year, which topped many year end lists and claimed the #2 spot on the Punknews Top 20 of 2005.

I would hope that as a band we aren't limited to being just viewed as a punk band, 'cause when it comes down to it our tastes in music and our aspirations stretch way beyond those confines. I love punk, and it's an integral part of who I am but I'm not owned by it.

To start off, please tell me the names of who is answering these questions and what you do in the band.
My name is Tom, I play guitar and sing.

I bet you all are pretty happy with the success of Searching for a Former Clarity, reaching the 100s on the Billboard charts. I was watching the Punknews interview and it seems you guys weren't really happy with everything else you've put out; would you say this is the first record you 100% stand by?
I think maybe that Punknews interview came off the wrong way. All the records that we've released are special and dear to me. They booked periods of time in my life, they capture moments. When you devote a lot of time to being in a band you tend to start getting anal retentive about certain things that maybe people who aren't in bands wouldn't understand. You look at things from a different perspective. With some of our past recordings there were certain limitations we faced either due to finances or time. When I listen to some of those older recordings I start to pick out things that I know we would have done differently had we been given more time or had access to better recording equip. But it's all a learning process; you can't get to point 'B' with out first passing point 'A.' In reality I wouldn't change a thing.

Searching is your second record released on Fat; how did they pick you guys up?
Toby who works at Fat asked us if we wanted to put out a 7" with Fat. We said we weren't really into doing a 7" right then, but if they wanted to do our next full-length we would be down for that. He talked to Mike and Mike said he would do it. The rest is history…

People are pretty angry at the success of your latest record; I've heard the term "Against Me! are selling out big time!" What are your thoughts on this? Do people have even more of a reason now because of your recent label change?
Jawbreaker said it best… "My enemies are all too familiar, they're the ones who used to call me friend. I'm coloring outside your guidelines. I was passing out when you were passing out your rules…" 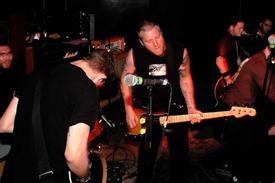 What do you believe a major can offer over an independant record label?
I don't think we are really looking at things like that. When you're in a band you have to recognize that it will only last for so long, so why not make the most of it. I would like to work with as many different people as we possibly can while this lasts. Go to as many different places, see as many different things as there are opportunities for. Stagnation is my greatest fear when it comes to playing music. You have to create situations where you feel challenged, where you're traveling outside of your safety zone. We've released 2 full-lengths, one DVD, and a 12" EP with Fat. It just felt like time to move on and try something different. This was an opportunity that came along that we didn't want to pass on. Who knows if we will ever be faced with a decision like this ever again in our lives? So why not go for it. It's also really important when you're in a band to remain on an upward trajectory. I don't want this band to end with a fizzle when it does eventually end. I want it to explode and be completely irreparable.

Do you believe signing to a major can properly spread the word you preach? Do you think people really listen to what they have to say and will change?
Well, even the act of signing to a major label gets noticeable attention. I think that when something is good and has merit, people will recognize that on any label regardless of size. It just depends on how much the band wants what they have to say to be heard. But as far as rock'n'roll really being an effective vehicle for change, I don't really know. You can debate that 'till you're blue in the face and it's still just an opinion.

These days a lot of bands have a myspace page; what makes it so damn cool and why do you have one?
Fat made us our myspace page. We don't have anything to do with it and we never go on it. I tried to log in one time to check it out but I couldn't figure it out. I might have had the wrong password. I don't really think they're that cool. Just undeniably popular at the moment. The music industry recognizes that and sees marketing opportunities.

When you're in a band you have to recognize that it will only last for so long, so why not make the most of it? I would like to work with as many different people as we possibly can while this lasts. Go to as many different places, see as many different things as there are opportunities for. Stagnation is my greatest fear when it comes to playing music. You have to create situations where you feel challenged, where you're traveling outside of your safety zone.

Back to that Punknews interview… Tom and Warren both mentioned they haven't smoked for numerous months; do you both still stick by that and what are your views on straight-edge these days?
I haven't smoked for over a year now (with the exception of a few drunken smokes on special occasions). I also took 9 months off recently from everything (drinking, pot, whatever). Cigarettes don't really fit into my lifestyle, being a singer in a band and all. It takes a lot of lung power. I also just feel like a better person when I do healthy things as opposed to when I'm not really taking care of myself. But I do think that there's room for moderation. You just got to have a balanced lifestyle. Not too much of this or too little of that. There's times when you need to stay up all night drinking, smoking, and cussing. Other times you need to take a jog and drink some wheat grass.

The style of Against Me! is definitely not generic punk; it could fall in categories such as folk/rock. Do you think your music could be marketed out of the punk scene?
Terms like that make me fairly uncomfortable: "marketed." I would hope that as a band we aren't limited to being just viewed as a punk band, 'cause when it comes down to it our tastes in music and our aspirations stretch way beyond those confines. I love punk, and it's an integral part of who I am but I'm not owned by it.

Against Me! has recently been added to the "Shirts for a Cure" organization; why does this organization appeal to you and what other organizations have you been involved in?
Why does the organization appeal to us? Well, I think cancer research is a pretty important thing. I can't imagine the pain of losing someone to something as horrible as a disease like that, or being diagnosed with something like that and having to face your own mortality. The way Mark Beemer has gone about setting things up with Shirts for a Cure is pretty amazing if you ask me. It really takes no active participation from the band. If you're a band who's asked to be a part of it and you decline you should be ashamed of yourself. They make the design for you, they sell them and then donate the money. All you're doing is lending your name towards the cause.
We've been involved with numerous organizations: Protect, Punk Voter, Food Not Bombs, etc. From playing benefit shows or lending tracks to benefit comps. In a couple weeks we are playing a benefit show in St. Augustine for a legal fund for wildlife preservation.

How did your recent Fat Tour go?
It was amazing. We won. All 50 states. Over 3 months long. We went through one van, one tour manager, numerous tires, 2 guitars, a zillion strings, countless drum sticks and drum heads, and I was hospitalized for dehydration and exhaustion. It was the best ever. I don't think I've even really had time to digest it all.

Any memories that specifically stick out?
Going to Alaska was a definite highlight. We woke up early one morning and me, Andrew, Warren, and Ken from Smoke or Fire went and climbed this mountain. It was so cold, the wind was blowing insanely hard and all we had on was our hoodies and thermals underneath, no gloves or anything like that. The view was incredible. 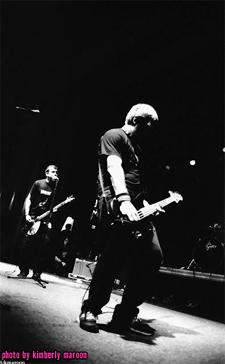 What do you have planned for 2006?
In February we are touring Australia. March, the UK, April/May the states with Alkaline Trio, end of May / beginning of June mainland Europe. July / August we are doing the Warped Tour, and then September back to Europe for some fests. Then we plan on writing a new record. We have some sleep penciled in for early 2008.

When are you touring South Africa?
I'm not sure, but we'd really love to come over there and play.

Any last words?
Thank you very much for the interview.