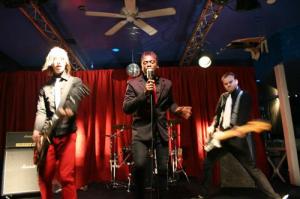 Love Equals Death have announced that they were recently robbed in Sacramento. The band detailed the incident in their blog:

We were in Sacramento and we went to Walmart for 30 minutes to buy a clip light for the merch area so people could see the T-shirts. While we were in the store, some asshole came up to our locked van, popped the lock with a tool, unlocked the van, and it seems like two of them quickly grabbed the G.P.S. that Chon got for Christmas and we had been using to find venues on this tour, two Ipods (mine and Tonio's), Tonio's backpack, Chon's laptop, and my new laptop. That's it…

The band will head into the studio next month to record three tracks for a split with Death By Stereo.

…Listen, we're not idiots. Shit happens. Nature of life and all that. I am sure that there are people who are fans of this band, and who are reading these words that jack shit all the time. Listen…if I can convince you of one thing….if you have to steal at all….don't fucking steal from people. You want to steal from big businesses and stores…fine…whatever…that's your deal….don't steal from other people. There isn't anything redeeming or cool about it. It's an evil fucking act. Plain and simple. All you do is hurt people. All the things we lost can be replaced, its just the sheer cruelty of the act that really is a fucking bitch.

Morale? Don't fucking steal from actual people. It's where the lines aren't so blurry and the act becomes just a pure evil one.