Much has happened to the Hives since breaking out of the punk underground in 2001 with Your New Favourite Band and 2000's Veni Vidi Vicious. The Swedish band's incendiary gigs have earned them a reputation as "the best live band on the planet" and they are two album deep into a major label deal with Universal. While maintaining their punk/garage rock swagger throughout, their latest release, The Black and White Album, also reflects the band's love of everything from hip–hop and new wave to electronic pop and heavy metal.

In a rare interview, the band's enigmatic bass player, Dr. Matt Destruction, spoke by phone with Punknews.org's JEndo during their current US tour to talk about his musical beginnings, the band's new album, and how playing live is "like makeup sex." 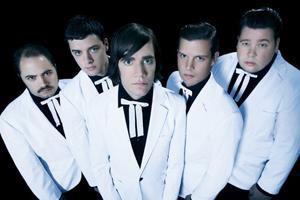 How old were you when you first started playing bass?

Was it your first musical instrument?

My first instrument ever was when I was nine years old. It was a trumpet.

No kidding? What kind of music did you play? Jazz?

I was taught just the basics. Kid songs to learn notes.

Do you come from a musical family?

Not really. My granddad played the balalaika (a traditional Russian stringed instrument). He was a musician or something. Maybe I got it from there. I think he played the piano. In my neighborhood where I lived, one of my neighbors was older than me and he played instruments and I thought he was really cool, so that was maybe where I got the interest.

So did you first start playing bass when the Hives started?

Not really. We kind of all just played different instruments together. After awhile, we kind of just melted into all our spots.

Did all of you go to school together?

Yeah. Not in the same class, but the school we have in Fagersta (an industrial town in Sweden) is so small, we were the only ones our age that played instruments.

Iâm trying to imagine the Hives in school together [laughs]

We were pretty strange.

Because we were punks in one way.

Were you the only punks in your school?

We listened to punk music and most of the other people in our town were into sports and disco. It was pretty easy not to blend in.

Did it feel a little bit like you were part of a gang together?

Yeah, from the beginning…and on [laughs].

Well, you have gang colors, right?

What do you think keeps the band going so strong after spending more than half your lives together?

So, thatâs what "Giddy Up" (a track on The Black and White Album) is really about [laughs]?

No, itâs not really. Itâs not about that [laughs]. But itâs something thatâs always worked, like in a relationship, you know? If you always have something that really, really works and you go from that to everything else, then it works out.

What were the punk bands or records that inspired you when you first started?

One band was called Strebers. They sang in Swedish and were quite political. One band was called Asta Kask. I listened to a lot of metal, too, like Judas Priest, Kiss and AC/DC. But the first ones were Swedish punks. I got some records from my sisterâs boyfriend and he had lots of seventies rock and heavy metal bands, so I listened to a lot of that.

I can hear some of that on the new album.

Yeah! I think we all like AC/DC very much.

I really enjoy the Hivesâ cover of "Back in Black." Speaking of the new album, a lot has been written about its departure from your earlier material and the different producers you worked with including Pharrell Williams, Jacknife Lee and Dennis Herring. The Hives have never been accused of lacking confidence, but did you ever have moments of doubt about throwing the bandâs "rule book" out the window when you were recording the new album?

No, not really because we feel like whatever you do in the process. Itâs not until the recordâs finished that you actually see what youâve done. But, as far as jeopardizing something, itâs always a choice of where you want to go as a band. Itâs almost like every time the decision comes up, we think about what would this do for us. What would this mean? Itâs what we do.

Itâs interesting you say that because I do get the feeling from the band that your approach to music is a mix of being really spontaneous and sounding like things just explode, but at the same time I get the sense that a lot of thought and care goes into it.

Yeah! Yeah, it does. Thatâs how we want it to be and sometimes we just throw ourselves into things. Like with this record, we knew everything that was going to happen if we recorded in the same way as we did in the past, how it would sound and everything. It was fun to take a little bit of a chance to try to do something else with our sound. We can still sound the same as a band even if we record with someone else or somewhere else.

Youâre sounding different, but you definitely still sound like the Hives. You donât sound like anybody else.

Yeah, like those songs Dennis Herring recorded in Oxford. He came over to Sweden to see us and rehearsed with us to get an understanding of how we work as a band. Then, we recorded and he knew how we work and how we play. It was really good. It turned out really good.

Speaking of taking chances, a lot of people were really surprised when you opened for Maroon 5 late last year. I saw you guys play at the Middle East [in Cambridge, Massachusetts] and then the next night when you opened for Maroon 5. You guys seemed to be really loving the challenge of playing to thousands of people, many of whom probably didnât have a clue about who you were.

Yeah! It was so much fun. Instead of playing on a TV show, you go to play for people whoâve almost never heard rock and roll, you know? That was really, really fun. We may have thought that people might boo [us] at first or wouldnât like it, but we also thought it might be their first time ever to see a rock band and they get to see us and that would be amazing for us.

It definitely seems like itâs won you a lot of new fans.

Yeah, some places weâve played on this tour, [Hivesâ lead singer] Pelle will sometimes ask [the crowd at a show], "How many havenât seen us before live?" Itâs been many. Not everyone, but maybe two thirds one night in the front row. Maybe theyâve heard of us, but they havenât seen the concert and theyâve seen us with Maroon 5.

The Hives are so accessible to your fans. Iâve seen you guys signing autographs and thereâs a whole section on your website called "The Time I Met the Hives." Was that a conscious decision when you started the band that you were going to be open to your fans that way?

No, it was natural. We have our favorite bands, too, and people we admire for their work that we respect. We want to keep that going. Those bands that played with us in the beginning were really nice to their fans.

Youâre carrying on the tradition?

Yeah. In the beginning, when we were touring, we could have, like, nine people at our shows [laughs]. And if one of those nine came to talk to you, it was really nice, you know? We mostly played for your friends, so it kind of felt like a family from the beginning, the Hives family. Everybody knew everybody. So, it kind of came naturally. If someoneâs nice to us, weâre nice to them.

Do you have any advice for kids out there in bands?

If you have an instrument, play it and have fun. If you want to do something and have fun, start a band. Thatâs my advice.