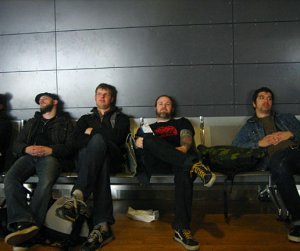 Our friends at Define the Meaning recently sat down with Nate Newton of Doomriders. The interview was conducted by Chris Burns who found out about the band's recent tour with Danzig, their future plans and more.

"Black Thunder" is sonically heavy as fuck. Is that what you sought out to achieve when you were in the studio?

We just wanted the record to sound like we sound live.I don't like overproduced albums that lose their human feeling. Too many bands try to get a "perfect" production where it sounds like music played by robots. We wanted it to sound live and real.

How did Doomriders come about?

Chris and I had been friends for years and had very similar musical tastes. We always talked about playing music together, and I ended up having some down time from Converge around 2002, so we started writing songs together.

The cover art for Black Thunder reminds me of the classic Iron Maiden covers in that when you look at it, you say to yourself, "holy shit! I have to check this out!" and then you have it painted on the back of your denim jacket. Was it important for you that the band logo and artwork reflect the heaviness of the music?

Absolutely. That was something that I loved about the punk and metal records I listened to when I was growing up. The artwork perfectly complimented the music. Not to mention I've always been drawn to bands that throw it all out there on the line and say "This is what we're about, love us or hate us…we dont care."

Doomriders is the coolest fuckin' band name. Were you surprised it wasn't taken already?

Haha no, not really. I think a lot of people are afraid to do things that are so over the top.

It seems like you guys do it for just the love of the music and that comes across in your
live shows. Am I right?

Absolutely. This band has always been about having fun and making music. Nothing more.

Your music is the perfect soundtrack for skateboarding and bmx. It gets you stoked to go out and shred. Did you guys grow up skating and riding bmx bikes?

I've been skateboarding since the age of 5. I grew up on skateboarding, punk rock, metal, hardcore, and rock and roll…..this band was simply a culmination of all those things. I still skate almost every day. The song DEATHBOX is a dedication to all skate punks.

When can we expect the new record?

Hopefully this year. Our drummer JR and his wife just had their first daughter so it's obviously slowed down our activities for a bit, but we've been writing a ton. We have a bunch of new songs and a lot of ideas.

The album has no great message; just get completely ripped and shred. Am I right?

Finally….somebody gets it. There are too many bands these days trying to make huge grandiose artistic statements…..nobody just wants to entertain people and have a good time anymore. 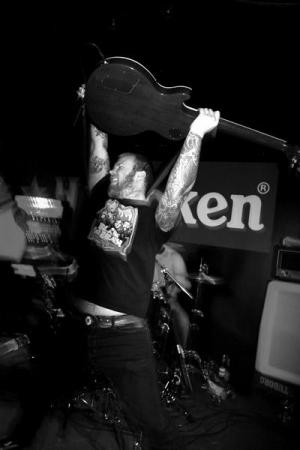 Amazing. He's a huge influence, and being able to play with him was a true honor. We had a great time.

Did you get to meet Glenn and talk to him about your cover of "Possession" on the "Not of This World" split release with Coliseum? Did he hear it, and if so, what was his reaction?

We didn't talk about that in particular, but he has heard it, and he approves.He was very vocal about how much he loves our music. I was floored. Danzig is king.

How did you get to open for Danzig?

He bought our record and he liked it. That simple.

When I saw you guys open for Danzig in NYC, the crowd was subdued. Does that inspire you even more? Nate was working to engage the crowd and I admired that.

I have always been of this mindset…..love us or hate us, I'm going to get a reaction out of you. I always try to engage the crowd, because then it goes beyond the "band on stage, audience watching" dynamic…it creates an energy that the band AND audience are both part of. I think that is important. It's one of the things that drew me to hardcore and punk rock to begin with.

I have to say that the opening to "The Chase" sounds absolutely EPIC live, just like on the album. Do you prefer to record live in the studio?

Yes. It's less work. If your band is good, and you play well together then you can record with a boom box and it will sound good. Most of my favorite albums are live recordings into just a couple microphones. You get an idea of the power of the band, and also get a recording that has alot of personality.

Do you plan on touring behind the new record?

Will you guys please do a cover of D.R.I.'s "Nursing Home Blues"?

Hmm. I don't know. I kind of prefer Couch Slouch.

How has touring evolved for you personally, for better or worse, over the years?

I have it down to a science now. It's easy. The only thing that makes it hard for me is being away from my wife for long periods of time. I hate that.

Are you guys able to devote all of your attention to the music and touring or do you have to have part-time jobs too?

We all have jobs, although I am a bit more busy with music than the other guys.

What are the Doomriders audience reactions like in Europe and Japan?

The same as here in the states. Anywhere you go people just want to have a good time and let loose.

Of course they are. Some of them are stolen from Thin Lizzy.

What do you do during your downtime while on tour?

I read that you guys are Celtic Frost fans. Were you guys able to catch them while they were on tour supporting "Monotheist?" If so, what did you think? Were you glad to see them return?

I missed them. Monotheist is great though, and I was certainly glad they got back together. Hopefully they'll keep it up!

Which band, or person, does Doomriders strive to emulate most? Who do you respect the most in music and why?

We don't try to emulate anyone really. We just want to have a good time and play loud.

Nate, do you feel like Doomriders provides you with an outlet, outside of Converge, to just rock out and be the singer, free of any expectations?

Yes. Plus I missed playing guitar.

I want to say thanks for the great music and I believe that I am speaking for all Doomriders fans when I say I cannot wait to hear the new record.

Thanks so much for the support!! Go fast, Play loud!!!