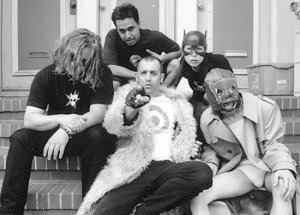 By all accounts, The Dwarves are some wild and wacky, nasty and wasty, rough and tough dudes. They sing about having sex- alot. Their album covers feature nude chicks covered in blood. On stage fist fights are as common as down strokes. Their guitarist often plays au naturale (if yaknowwaddaimsayin). They got kicked off Sub Pop records for staging a hoax by announcing that the same guitar player was killed in a knife fight over crack… and they even graciously accepted flowers in remembrance!

But, with a new album right around the corner, one wonders, just how much of the Dwarves is a calculated attack against society norms and just how much is primal howling? How much of lead singer Blag Dahlia, birth name Paul Cafaro, is an exhibit of the human condition and how much is cartoon given life? Punknews interviewer John Gentile recently sat down with Blag to get the low down on these animals called The Dwarves and also to catch some info on the new release.

The new Dwarves record is tentatively titled The Dwarves Are Born Again. The previous record was called The Dwarves Must Die. Can you explain the significance?

Once we were dead, it was critical that we be reborn. Otherwise, whoâs gonna make the records? Although Tupac managed to make quite a few records after he was dead. And so did HeWhoCanNotBeNamed.

The length between the previous LP and the new one is the longest break in Dwarves history. Has this time been one of quiet reflection, or of rapid discovery?

The Dwarves played quite a few shows during this period. We went to Europe, Australia and all over the US. We even went to Canada- which Iâm still not sure was a good idea. Also, we made a bunch of non Dwarves records. HeWhoCanNotBeNamed, our guitar player, made a solo record which is a must have for Dwarves fans. I made a weird retro record called Candy Now with a Russian girl singer and some hotshot musicians. Itâs a cool record- maybe a bit light for all Dwarves fans, but the ones who get laid once in a while will like it. Also, I put out a dirty book called NINA, which tells of the adventures of a horny 14 year old. No sleep âtil Hades!

Can you let us know what the album will be like?

Iâd say itâs more like the older punk stuff, so our fans should be pleased. There are some weird wacky moments, but not as much as The Dwarves Must Die, which was as out there as we have gotten. Also, no one wanted hear me rap again!

We deliberately use it. We donât know how to do anything else.

The title of the new LP suggests that we are entering a new segment of Dwarves history. Is this a new Dwarves era, or merely another link in your history?

Itâs the era where we actually get paid to play music. I prefer this era to the, "starve and be cool" era. Either way, like Grandmaster Flash and the Furious 5, we donât quit. Itâs a rebirth in the sense of us being a bunch of old babies, though.

Thereâs an interview with you where you state that the Dwarves are a pop band. Can you elaborate on this?

Most bands that play punk do it badly. Bad songs, bad performances, unoriginal approach. This is called, "integrity." The pop punk bands donât sound pop enough- they canât pull it off, yet their version of punk is soft and wimpy.

The Dwarves shoot for both extremes. When itâs punk, itâs heavy, fast, and aggressive. When itâs pop, itâs melodic, well produced, and creative. In most cases, weâre the best punk band the kids have never heard of!

Sometimes I think that Blag Dahlia is not so much a person as he is a caricature of Paul Cafaro. Have I peered too deeply?

Everyone has preconceived notions. Mine are very Blag-like and thatâs why people are amused by them. Paul Cafaro is the guy who has to go to the dentist and do his taxes. Blag is the guy that gets fucked all the time and does drugs. Which one would you prefer to be? I try and be Blag whenever I can get away with it!

Oh man, when playing in San Jose, California, you took a nasty five foot spill off the stage! Did someone push you off the stage?

That was weird. Some drunk guy grabbed me around my arms and propelled me offstage onto a hardwood floor with him right on top of me. It was pretty brutal.

In the Dwarves song "FeFU," you say that you want to have sex, eat, and fight. Why focus on these three urges?

Actually, fuck gets mentioned much more frequently than the other two things. But really, what else is there besides sex, violence and food? Where I come from in Illinois all we had was the sex and violence- it took California to introduce me to food. Now Iâm complete.

Any last comments? The Dwarves Are Born Again is going to arrive late this year or early next year. It will reaffirm the Dwarves as the best punk band ever. However, like all our records, itâll take 5 years for everyone to understand it. By then weâll have a new record out and people will like this one better.

Also, weâre putting out a bunch of reissues with many extra tracks and neat stuff. Our albums Young and Good Looking, How to Win Friends and Influence People, Must Die, Lick It and Free Cocaine are all being re-released. Itâs a cornucopia of Dwarvish delights!

Lastly, weâll be playing shows all over the US and hitting the UK for Rebellion festival among others this summer. Check out, Www.thedwarves.com. It has dirty pics and video and free music and all kinds of stuff. Now go fuck yourself!

These Are They to release "Disposing of Betrayers"