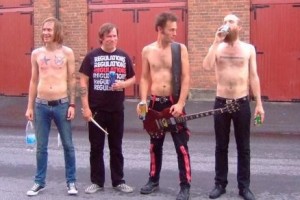 by Aubin Paul Deranged 11 years ago

AC4 will be releasing their debut full length later this month on June 30, 2010. The band is the new hardcore project from frequent collaborators Dennis LyxzÃ©n and David SandstrÃ¶m of Refused, The (International) Noise Conspiracy, The Lost Patrol and TEXT.

The 15-song LP is being released on Canada's Deranged Records (Fucked Up, Vicious Cycle, Career Suicide) and is only due out on coloured and black vinyl. Pre-orders are here.

Videos: The Arrivals in the studio, release topical video for "Drill Baby Drill"