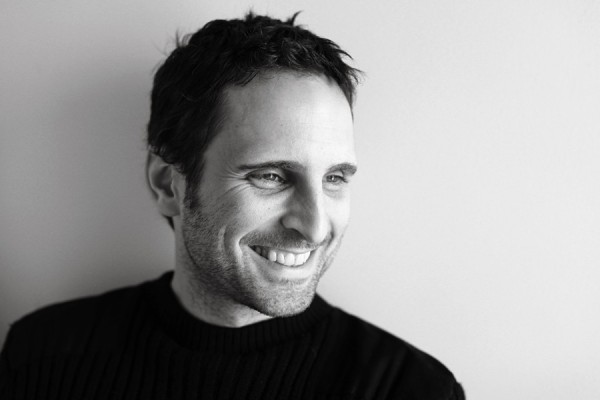 by Andrew Waterfield Interviews 10 years ago

Sean Murphy's artwork is in high demand. In the last few years, his atmospheric and emotive line work has graced some of comics' most acclaimed titles, allowing Sean to collaborate with some of the finest writers of his generation, including acclaimed work on Hellblazer and Hellblazer: City of Demons; penned by Jason Aaron and Si Spencer respectively; and Scott Snyder's American Vampire: Survival of the Fittest. He is best known, though, for his work with legendary writer Grant Morrison on the Vertigo maxiseries Joe the Barbarian, a tale of fantasy, family, and diabetes.

As already mentioned, Sean is an artist in high demand, so why is he taking a break from collaborative work to put out Punk Rock Jesus; the tale of Chris, a clone of Jesus Christ; his first solo comics work in seven years? PunkNews editor Andy Waterfield sought to find out.

Hi, Sean. Your new mini-series, Punk Rock Jesus, began this month. Can you give our readers an idea of what it's about, and why they should pick it up? Punk Rock Jesus is about what would happen if a corporation cloned Jesus Christ (from the Shroud of Turin) and turned it into a reality show. The clone becomes the center of a huge controversy between science, politics and religion. And after 14 years of the corporation messing with his life, the clone decides that he's an atheist, escapes his island prison, and hits the street to start a punk band. Then he starts a media storm with his music as his way of fighting back against the trends that created him.

If you're a fan of cyber-punk and don't mind a little thought provoking controversy, then pick it up.

You've spoken in other interviews about how this story has been with you for years, and how you're finally getting a chance to put it out into the world. What's it like to have an idea you're so passionate about gestating for so long, and how has it changed as you've developed as a creator, and as a person?

Having it in my head for so long has been both frustrating and beneficial. But in the end, I think it's good that I had it on the back burner because if I tried to do it years ago when I was more militant, I might have hit readers too hard over the head with my secular beliefs. Now that I'm older, I know to pull back and be more inclusive. So even though it's written by an atheist, it won't read like I'm grinding my ax.

Now, off the top of my head, the first issue features a range of topics which have something of a record for provoking lively debate, to put it mildly. Did you have any reservations about putting together a book which features themes of (and you'll have to help me out if I miss any) human cloning, reality television, media exploitation, sectarian violence, and Christianity itself? How worried are you about rubbing people up the wrong way, inadvertently or otherwise?

There's always that fear, of course. I have sleepless nights when I worry severely about the repercussions, then other times I'll wish I'd pushed it even more. My long term thinking is what gets me through: I don't want to turn 80 one day and look back on a career of perpetuating someone else's IPs. And if an artist's best work is something he's passionate about and willing to take a risk on, then I HAVE to do PRJ. Succeed or fail, at least it feels more like "real" art and less like commercial art.

As pretentious as that may sound.

You've also spoken about how some of the characters reflect facets of your own personality at different times in your life. What was it like trying to craft a compelling story with characters you relate to on that personal a level? Did you ever consider going easy on a character you particularly liked?

I have a few characters that I'd rather not abuse, but for the most part I'm prepared to mistreat all of them if the story calls for it.

Sticking with the idea of drawing facets of characters from oneself, where does the 'Punk Rock' part of the book's title factor into all this? What role did punk play in your life growing up, what role does it play now, and how important is the 'punk' facet of Chris to his character?

I came into punk later in life, I'd say in my early 20s. Up to that point I was a goody-goody: top 40 type stuff, classic rock, and a little grunge. No one that you would want to hang out with if you were into hardcore or punk. And my social principles reflected that kind of music: nothing in my head was controversial - it was all in keeping with the norms of the town I lived in.

PRJ is what got me into punk. When I became and atheist, I knew I couldn't have Jesus be in a bluegrass band - it HAD to be punk because it's the last thing most Christians would expect to see. So in order to do research, I started listening to more punk. It wasn't the sound itself, but mostly the punk attitude and a lot of the lyrics that began infecting me.

In the early part of the series, the punk is mostly in the background. The corporation's copacetic attempt to make the Jesus clone more "America friendly" (blue eyes and white skin like in a children's Bible) should have readers expecting it to come crashing down in a later issue. And it does: issue 4 is what readers will be waiting for. That's when the mohawks appear.

A lot of writers talk about including things their artists like to draw, and trying to avoid including those things they don't. Given that you're handling both sides of the equation, are you ever tempted to include things that have little to no bearing on the story, just because you'd love to draw them?

Totally tempted! But PRJ is designed to include things that I love: scifi, cars, punk, action, etc. There's a lot I ended up writing that I knew would be hard to draw, but because it fit the story, I managed to push through those difficult scenes.

I hear stories about artists making writers change things that they don't want to draw, and that always confused me. Aren't artists supposed to be storytellers? If a car chase fits the story, then learn how to draw cars. Don't puss out and ask for a rewrite because you don't like using ellipses.

How does the role of writer/artist compare with handling the art duties on a book? Do you bounce ideas off anyone close to you, in the way that you might with a co-creator? Do you ever get on the phone to your previous collaborators to pick their brains?

I bounce things off everyone who's willing to listen. My wife gets the brunt of it, followed by my editor. I'll also reach out to my comic book connections of I can. And reading reviews, even bad ones, is helpful in learning more about what might not be working.

I spend a lot of time alone in a room, so I'm the first to admit that I'm not always the best judge of what's successful in my stories and what isn't. If I start producing bad art of any kind, I'll need my friends to reel me back in. I don't want to turn into Toth.

What's the feedback been like, so far? I've seen a lot of your contemporaries raving about the book online. How was that? Has anyone taken umbrage at the content and decided to tell you about it?

It's insanely great. I've never been involved with a book that was received so overwhelmingly well. I thought it might be a sleeper hit - mediocre sales on the issues and then word-of-mouth would help it be an mild success on the back end. But it's doing much better than that as far as reception. I just hope the sales reflect that.

To answer your next question, I have had some fundamentalist types writing me nasty emails now and then. There are a couple blogs that trashed the book before it was even released, and I hear rumors of boycotts in Brazil (but nothing confirmed). Overall, it's been eerily quiet. I expected to get more shit, but who knows--maybe it's still on it's way.

The thing that's surprised me the most is the support of a lot of religious readers. All types of Christians write me and tell me how much they're digging it, and that's meant a lot. The majority of religious people aren't the FOX news types, and it's a lesson I keep learning.

Lastly, imagine one of our readers is intrigued by the concept of the story, but hasn't read comics before, and isn't sure whether it's for them. What would you say to them to convince them to give the medium, and Punk Rock Jesus in particular, a chance?

I'd say that this person should pick a comic that looks good to them, and give it a shot. If they don't like it, then it's our fault, not theirs.

Punk Rock Jesus #2 (of 6) is released through DC/Vertigo on the 8th of August, 2012. The first issue is available digitally via Comixology, or from your local comic shop. Preview pages from #1 can be found below. All images used with permission. 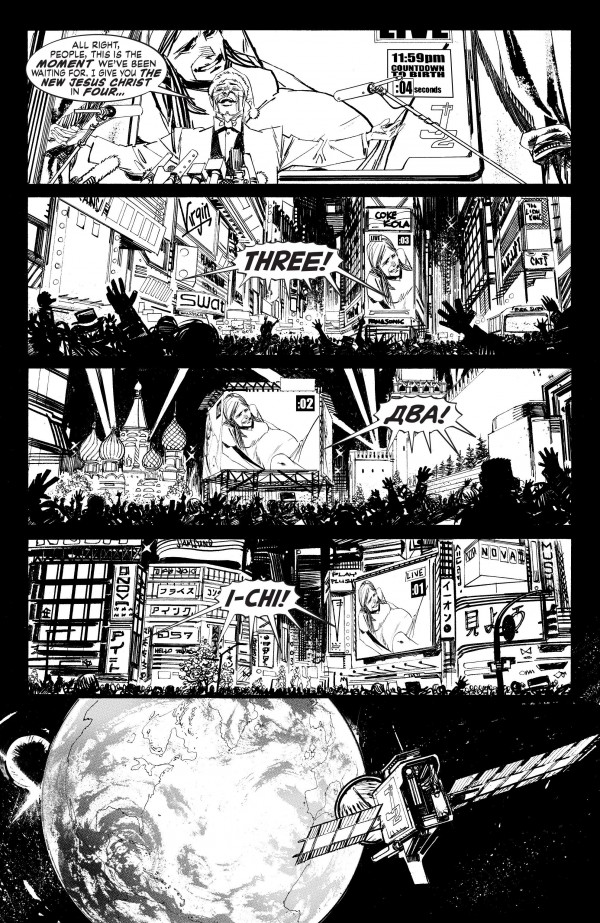 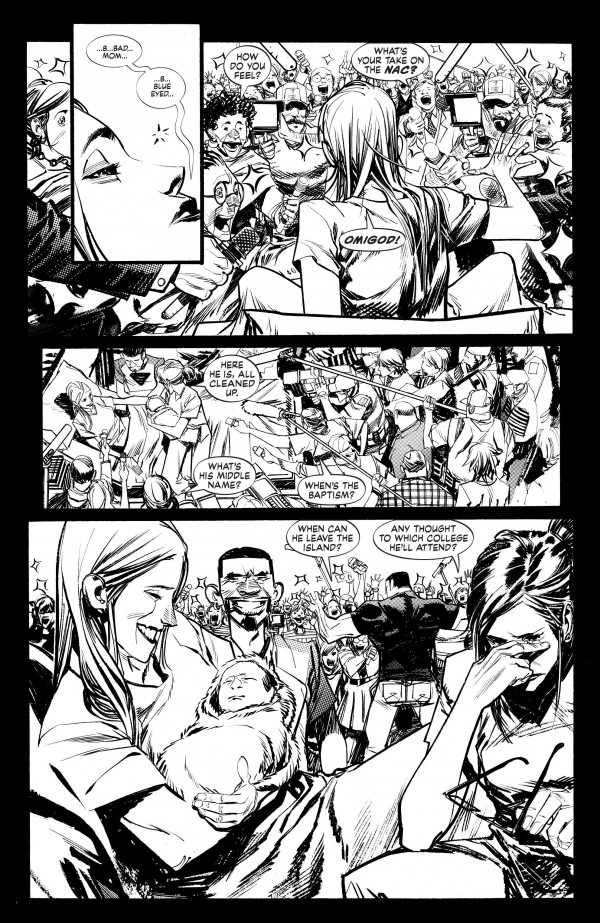