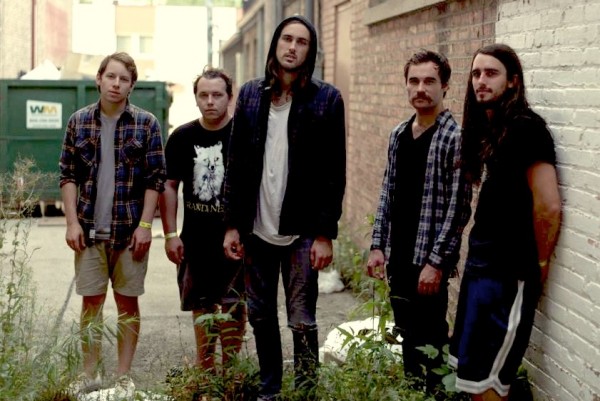 Pianos Become The Teeth took a breather off their Title Fight/Single Mothers tour to check in with us through vocalist Kyle Durfey. After last year's The Lack Long After, PBTT solidified themselves as one of the most talked-about post-hardcore/screamo bands around. In addition to an array of great music, their disposition as down-to-earth and humble guys have made their following even bigger. Punknews writer Renaldo got to chat with vocalist Kyle Durfey and shoot the shit on how last year's acclaimed release help them establish themselves in the order of things…including what's in their CD player, their diets…and Taylor Swift?

How'd you guys see Lack [Long After] and its success compared to days of Saltwater and Old Pride?
I think Lack [Long After] was just more widely available due to better distribution and Topshelf pushing it a bit more, so naturally, a few more people heard it. I think this is the record that most people who know who we are now, heard first, which we would prefer. Saltwater was a completely different era of the band that we will never revisit, but you have to start somewhere, we always want to grow.

Did you guys feel any extra pressure creeping to deliver on last year's record…and now, is there any more exerted on your backs with a follow-up?
I think there's always an expectation from people who are into your band but it doesn't really play much of a role in our songwriting. We kind of knew what we were going for. I think the only real pressure we feel is the time crunch when writing for new material. We always take forever. With newer stuff, it's a bit early to say, but we know it'll be different.

Kyle, you always poured a lot of emotional content and heavy heart into your songs, and Lack [Long After] seemed like it had extra. Could you fill us in as to what was weighing on your mind or driving you during this writing process? (I ask as a lot of sites have reported you referencing your mother and father as to what was inspiring you)
The death of my father, and how losing someone, affects every aspect of your life.

How goes the tour with Single Mothers (I'm a huge fan and am hoping to see their name bigger and bigger soon) and Title Fight?
So far it's been a blast. Everyone is a total sweetheart. We knew everybody before this tour but not well. It's awesome really getting to know everyone. So fun to watch both bands every night.

In your vids, we can see peeks at tees from Seahaven and Brand New etc, so I ask what are you musical influences?
Well Seahaven are our friends, all we really wear on tour are tshirts from friends bands we get for free and then we end up all wearing the same thing everyday. We listen to a ton of different stuff. Brand New, Jimmy Eat World, Planes mistaken for Stars, Deathcab, Ryan Adams, The National, Meshuggah… As we've gotten older and written music with one another, our tastes have changed.

Would you say the new record is a transition, a progress or an evolution? Or all of the above?
I'd say it was more of a natural progression. I think it made sense for us. I'm sure the newer stuff will be more of a transition.

What record are you listening to these days on the road and which band would you advise folks to check out?
The new Fiona Apple, Taylor Swift, Whiskeytown, Birds in row, Austra, Engine Down, Mark Kozelek, the new Further Seems Forever record, new Hostage Calm…our friends in a band called Octaves just recorded a banger.

After touring, what's next in store for you gents?
This is probably the last tour on this record. We'll be home all winter writing for another full length and we're trying to hit some places we haven't yet in the spring/summer.

Your fanbase is growing so what advice would you have for bands coming up looking to cut their teeth at labels similar to yours?
That's a loaded question. We've been fortunate enough to work with and become great friends with Topshelf. I would just say, be careful signing to a label if you don't know exactly what you're getting and what they can help you achieve. I will say, any help your band can get to achieve your goals is always a good thing as long as you're being honest.

Lastly, relay one message for your fans
Thanks for supporting us. And sorry about the smells, the farts on this tour have been some for the books.