Mark Beemer (Shirts for a Cure) 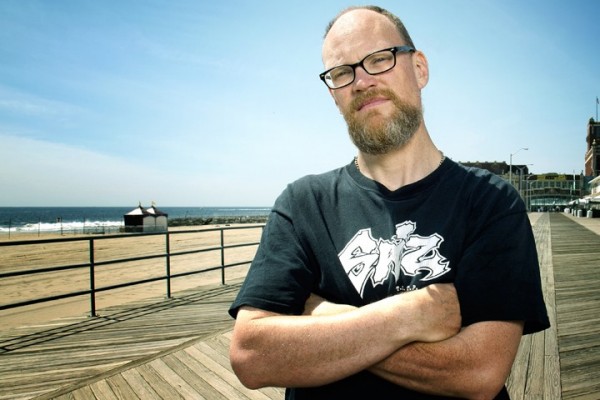 Punk rock photographer Mark Beemer, founder of The Syrentha J. Savior Endowment (SSE) and Shirts For A Cure (SFAC), recently announced the launch of a new IndieGoGo campaign to fund the re-release of his discontinued book of live show and press images, Stealing Time. First published in 2001, the book features images from Beemer's two-plus decades as a staple on the punk and hardcore scenes. The book contains a number of updated images including punk and pop-punk stalwarts such as Rise Against and My Chemical Romance, as well as photos of scene veterans The Bouncing Souls and Hot Water Music.

The IndieGoGo campaign to fund Stealing Time ends April 9, 2013. Once the book has been funded, all proceeds from its sales will go directly to SSE to help underprivileged women battling breast cancer. You can find out more, or make a donation to the IndieGoGo campaign here.

Punknews' staffer Justine Rowland spoke with Mark this week about the book, working with Drexel University Music Industry students on the IndieGoGo campaign, and SSE/Shirts for a Cure.

Tell us about your book, and why you decided to re-release it right now.

Sure. Stealing Time is a book that I self-published 10 years ago. Iâve been taking photographs of bands and music since the late 80s, and it has always been something I did for fun. If someone wanted to use them, great. âHere you go, just give me ten bucksâ or essentially what it cost me to take and print the photograph. In the 80s and 90s it cost more to take photographs than it does now, but regardless itâs something I did for fun and I did it quite well.

So, I went to school for it and eventually made it my living, but not band photography. I went off and became a photojournalist with different newspapers around the northeast, and thoroughly enjoyed it. But that world was slowly dying so, I molded my life into different aspects of photography. Band photography was something I still did constantly. Every chance I got I went off and took photos of my friends' bands or whoever was on tour. It was good time. I enjoyed it.

Iâm one of those people who canât sit still, so when I was a kid going to shows in the 80s, I was a little bit awkward because I needed something to do besides dance and sing along. I had to do something with my hands. I needed a purpose beyond just being a spectator. So after I started the breast cancer foundation, which I still run to this day -the Syrentha Savio Endowment/Shirts for a Cure- I felt that we needed a financial kickstarter. We needed a way to bring in some funds quickly.

Syrentha was always a big fan of my photography, so I decided to publish a book of my band photographs. Nothing all that special, and it was definitely going to be for a small market since the bands Iâd taken photographs of were bands that only reached a certain amount of people. I published it ten years ago just to get something out there, to raise a little cash, and essentially to make my mark on the world. It sold relatively well, about a thousand copies. It was kind of like a kickstart for me to remind myself that I love doing this, taking photographs, and I went off and started doing it more often.

So, what weâre doing now is that it has been ten years, the foundation is still going quite strong, so why not publish the book again. There have been calls for it recently. Why not add an extra ten years of photographs? So thatâs what weâve done. We went back and re-edited a bunch of photographs, re-scanned them, and added fifty more photographs from the past ten years. Bands that are more popular, more well-known, Rise Against, My Chemical Romance, Thursday, Thrice, bands of that ilk, and bands that have helped the foundation strongly. Though it is a labor of love, itâs also something that will generate some income for the foundation.

Great! Youâre partnering up with Drexel University Music Industry students. How did you end up partnering with them for the project?

It was kind of a no-brainer. Their professor, Darren Walters, is an old friend of mine. He ran Jade Tree Records full time for many many years, and I had known him from the mid-to-late 80s from going to shows around the east coast. We became friends in the early 90s when his band Railhed started touring with a band I used to tour with called Worlds Collide. We were really good friends then. Then later in life I started doing a lot of photographs for Jade Tree, and our friendship has blossomed more out of that.

Heâs been at Drexel now for about four years, and we had always talked about working together in some aspect. This just felt right. When he started the semester off, he knew what I wanted to do, and he suggested that we do it together. They have been helping with most of the logistics on the campaign, so itâs been a big help to have them around.

Was the IndieGoGo campaign your idea or theirs?

Well we wanted to do Kickstarter initially. To do an IndieGoGo/ Kickstarter and make it really pop, you need something that people are going to kind of laugh at or take note of. My friends in The Bouncing Souls said "yeah sure weâll play a show for you, but we want to get paid also." It was kind of a joke, but if someone wants to pay 50 grand to have the Souls play in the basement, weâll make it happen. It was something to garner attention.

The problem is that Kickstarter only allows someone to give up to $10,000, so we had to switch it over to IndieGoGo, which is fine. We choose IndieGoGo because theyâre more oriented towards independents and they give breaks to nonprofits.

Other than The Bouncing Souls show, how did you decide what perks to give out for the various contribution levels?

We did a lot of research on what campaigns got funded, how they got funded, and what perks they were giving out. We wanted to appeal to everyone. From the big spenders all the way down the people who want to support but may not want to buy a book, they may only want to support you at the $5 mark. Figuring out what to do, the perks, is really what Drexel did at the beginning. And they did a wonderful job.

So howâs it going for you? I know you have a few days left right now.

Yeah, weâre a little over halfway there. Itâs a bit nerve wracking to look at the dollars every day. In the beginning there was a lot of splash. Itâs a little bit slow now but you know, a few days left. We hope to be funded. I think that we can do it. We just need a big push at the end here. Itâs not that much additional money.

Hopefully posting this interview up on Punknews will give you a little push too.

Yeah, thatâs what we hope!

If the IndieGoGo campaign is a success and it surpasses the cost of funding the book, all of the rest of the donations will go towards the endowment that you founded. For readers who donât know about the endowment, could you tell us what thatâs all about?

Of course. In January 2002 my wife, Syrentha Savio, lost her battle with breast cancer. I was too young to really understand what to do with grief and what to do with sadness, so on a whim and as a way to occupy myself and keep her name around, I started a breast cancer endowment. An endowment is a named account at an institution. This one was at the Lombardi Center at Georgetown University, where she was treated. But for them to have a named account we needed to raise $50,000, so I went off and started to do such a thing.

Never in my wildest dreams did I think that I was going to raise anything around $50,000 in ten years, let alone ever. I started doing a couple things here and there, nothing all that ground breaking. We did a walk. We did a dinner. Everything felt very safe and kind of generic. Within a year I felt that I really needed to do something that was really going to make a different, and do it now. Something that would make more of a splash.

At the time, I was traveling with the Jade Tree kids a lot, and we were going to different festivals all over the country. One weekend I went down to Louisville for Initial Recordsâ Krazy Fest in â03 or â02. Dan Yemin came along. He was going through loss at the moment as well, and we were just kind of grumpy old men together. We were talking about plans for the future and plans for the foundation. Without even thinking I asked him to reunite Kid Dynamite to raise money for us, and without blinking he said yes. We ended up doing three days with Kid Dynamite.

It really showed me that my love of music, my trust in this music, was really going to be able to give back to me. So I started really pushing to find other ways that I could use this music world to really make a difference. My first show ever was a big charity show for apartheid. It has always been ingrained in me that this music gives back. So why not give back on a scale that I could use as well?

Iâve been running the foundation now for about 11 years. We started doing Shirts for a Cure in 2003 or 2004, so thatâs been a long time as well. The idea behind Shirts for a Cure is that a band lends us their likeness/design, a design that we usually have designed. We pay for the shirt, we print the shirt, we promote the shirt, and we use the proceeds to fight breast cancer in different clinics around the country.

As someone with a ton of family history of breast cancer, I love what youâre doing. Thank you so much for Shirts for a Cure and for the endowment.

Thank you for your support.

Well Iâd like to remind them that Shirts for a Cure is out there all the time, not just when you need a cool shirt. Check back on us a lot. We add new bands all the time, and itâs not just about whatever is hot right now. Weâve got a lot of retro bands and a lot our designs stick around. Just check back as often as you can. And please support the IndieGoGo campaign. It means a lot to us. We really hope to get funded, publish the book, and have it out by summertime.

Awesome. Thank you so much for your time, Mark. And good luck with the IndieGoGo fundraiser.

Thank you so much!