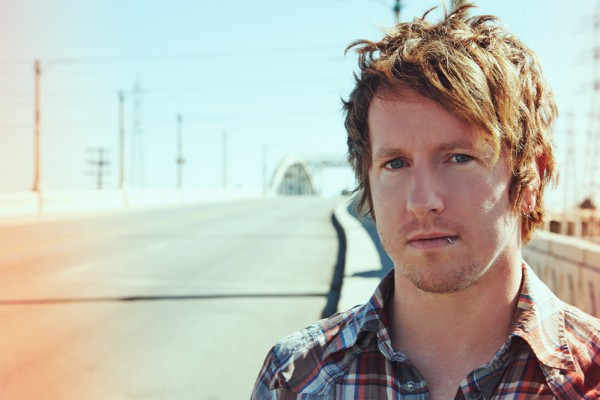 Contributed by sammiesiam, Posted by Kira Wisniewski Interviews 8 years ago

For over a decade now, Jeff Berman, under the name Divided Heaven, has sung songs of experiences he has had or were shared to him as a singer songwriter. Breaking from his usual format, he recorded his second full-length LP, entitled Youngblood, as a full band album. Youngblood is due out March 25, 2014 via Say-10 Records. Divided Heaven sat with interviewer Samantha Barrett to talk about his new album.

Give me a brief history of Divided Heaven?
The idea started in the fall of 2003 when I was living and studying in Berlin, Germany. I was in college at that point and I was playing in bands. When I was in Germany that was the first opportunity that I had time to write songs that were just for me. Before going solo, I was playing in bands that were hardcore/street punk bands. I always tried to get due diligence, I did not intend for it to be a solo singer songwriter out right. I intended for it to be more in the vein of The Promise Ring, Jimmy Eats World and Saves the Day. When I got back to the states, I kind of shelved the ideas for a number of years until 2007 when I decided to actually do it. I took singing lessons for a while and really focused on becoming a better songwriter. Summer of 2007 is when I started playing around New York City. I put the project back on the shelf again to buckle down and work to save money to move out to Los Angeles. I was in Los Angeles for about a year, and my buds in Protagonist did a lot of touring and they had a show booked in LA. They asked if I would open the show, which reignited my desire to do it again. At that first show I played in LA, I met my friend Bradley who said he wanted to record a record with me. That was just a bit of momentum that was encouraging enough for me to say "I am not putting this on the shelf again, I am going to do this!"

Speaking of your punk background, how has your punk background influenced Divided Heaven?
I think my background in the specific street punk and hardcore scene has influenced Divided Heaven in ways that has nothing to do with the music. I am very proud to come up in that scene and having the DIY mentality. I was always the kid who will go see The Business, I would go see Warzone and Agnostic Front. But I would also go see The Promise Ring or a local indie rock band. I think it gave me a good bullshit meter. I have a common thread with these bands that they might not think we share if they just listen to my music or hear me play, but once we talk… Itâs nothing musical but growing up in that scene has been very helpful, influential and useful.

You recently toured as a full band. What made you decided to tour with a band?
I recorded the new record last summer, and the new record is a 95-percent full-band album. Because of that I knew that touring with a full band would be inevitable. It was just a logistical challenge in how to make it happen, I spoke to the guys in Teen Agers, who are in the general Protagonist family. They were willing to help, so Brian Forst from Protagonist wanted to come and play guitar. I recorded a record with a full band and I knew when the record was done there was no turning back.

Is it going to tour with rotating members?
Yeah, I've done some shows on the west coast with completely different band members. More or less the same vibe as this last tour. I am trying to keep it interesting for people who come to see me and I am trying to keep it interesting for myself. I love playing with these guys and itâs been a blast. They come from a punk and hardcore background so they hit a little harder, they strum a little harder, and they kind of kick into gear a little faster. It has a totally different gear than the friends that I play with in Los Angeles, they have an alt-country feel to it and I am still trying to find a balance.

How is touring with a band rather than going as a solo artist?
There is a lot more camaraderie with touring with a band than touring by myself. On the last tour there were seven of us. There are its pros and its cons. Inevitably with more people, its more money and more gasoline, you canât tour as long as opposed to myself I would be gone for 40 days straight, get by and do totally well.

Any highlights from your tour with Teen Agers?
Brooklyn was a highlight since I used to live in there. It still very much like home. My best friend's husband's band played, their called Scarboro. My sister lives there now. Brooklyn is home, it feels very much like home to me. The DC show was great as well, I went to college there. I do not miss the cold, the cold was a bit bothersome. I am glad I can feel my toes again.

You just signed to Say-10 Records. How is that going?
Itâs going great, Adam is awesome! He is so on top of it. We linked up through a mutual band that we are friends with. He knew that I was looking for a new label, some of the bands that I have played some shows with has passed along the good word to me. I contacted him to reconnect with him. I had known him from old Baltimore days, about 12-13 years ago. He said he was interested in putting out my new record and that made me happy. I had a few other options on the table but he was so enthusiastic and focused that it was obvious I wanted to work with him. The label is based in Richmond, Virginia.

On March 25th, you will be releasing a new album titled Youngblood. Tell me about the new record?
This new record is called Youngblood. The main difference is that it is a full band it has a lot more atmospheric sounds, it has a full sound. I think the first record, A Rival City, I am still very proud of that record. When I look back at that record comparing it to Youngblood, it was very linear and itâs all about the same spot. I still love those songs but the songs on Youngblood captures a more recent spot. There has been a lot that has changed in my life in the last few years in terms of moving, especially in terms of relationships, family stuff and friends stuff. For the first time in my life as a songwriter, I was really able to grasp my emotions and put it into songs. I was really able to grasp what my friends and family members were going through and put it to song. It has a lot to deal with death and the grieving process, none of which is personal but itâs reflected from the people close to me in my life. Musically it so diverse, itâs more delicate when it needs to be and its sounds so humongous when it needs to be. My producer and I really found a really tactful, awesome balance. The producer I worked with is named Charlie Stavish. He has worked on a number of things, Against Me!, Imagine Dragons, Bryan Adams and all the songs were produced by Charlie except for one which is called "Melissa Militia," which I recorded with Stephen Egerton while on tour. That was actually the first song recorded for the record. I got over to his studio in Tulsa on Election Day in 2012. I was like "Are you going to vote today?" He was like "Nah, I'm not going to vote today." I was like, "Neither am I. I have three songs I wanted to record. Would you want to be my band for like three days?" He played bass and drums; I did the guitar and vocals and added some electric guitar. We didnât play any shows together so I canât say I was in a band with him but he was my backing band for that track.

You are originally from the east coast. Is there something that you missed that you do not get in Los Angeles?
Yes, I miss the architecture of the east coast, I miss the feel of these older cities and the colonial vibe. I grew up in Lancaster, Pennsylvania. Itâs a colonial city that has a lovely warm vibrant feel, especially during the holidays. I miss the seasons. I miss New York City in the summertime, there is nothing like it. I miss Benâs Chili Bowl in Washington, DC. I miss Smash Records, I miss the Black Cat. I miss hanging out in the Lower East Side.

Do you have any tour plans for 2014?
I plan on going back to Europe and touring more of the US. I plan to push this record as hard as I can. I have never been more proud of anything I have ever produced in my entire life. I hope it resonates with people as much as it has to me when I listen to it. I will do anything in my power to push it and in a way I cannot really believe it's 2014, everything has moved so fast in the last couple of years. The underlying story of Divided Heaven is that these little baby bumps of momentum here, Say-10 wanting to help with this record and Paper and Plastick was very helpful with A Rival City. I know Panic Records wants to do something with this the LP in Europe. Opening with Punk Rock Bowling, playing Pouzza Fest, playing at The Fest for a couple of years. Little by little itâs added up, I am hoping this year I am going to continue to be given these boosts of momentum.