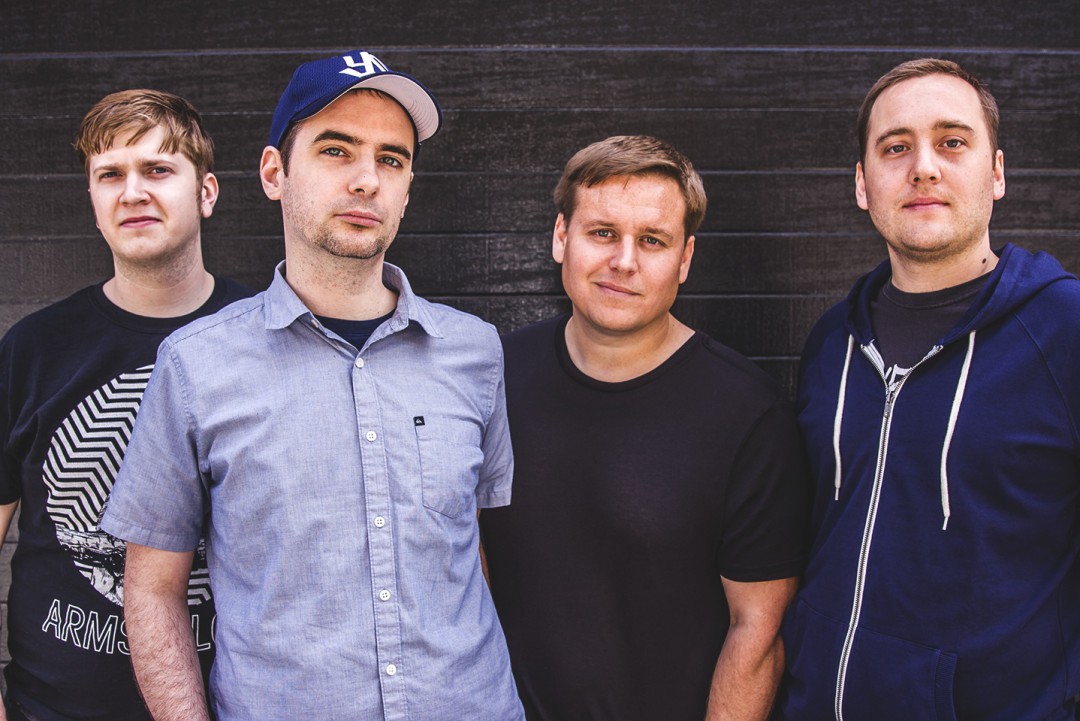 Many bands like to experiment with the writing process of a new album. As for Banner Pilot, not much has changed in three years. The dudes had a year to complete their fourth full-length album and came out with the catchy punk we've grown to love and expect.

They have achieved a mixture of the same old Banner Pilot songs with a new flare. On April 15, 2014, Banner Pilot released Souvenir on Fat Wreck Chords. Interviewer Samantha Barrett spoke to Nate Gangelhoff to talk about the new record and some weird chords.

For your fourth full-length Souvenir . You recorded out of Terrarium again. How was your experience recording there again?
It was really awesome! We recorded everything we've ever done at that studio and I've recorded stuff with other bands there. It's a great studio because it's really professional. The studio has really great equipment and guitars and other stuff to use. It is also really fun to hang out there, it's not just a studio where it is just one big room, where you are subjected to recording the entire time. Terrarium has rooms where you can hang out in, play video games or watch TV. There is a lot of cool stuff in that part of Minneapolis. It's always fun to just be there. It was nice, compared to last record we were more prepared this time. The experience was definitely a little more relaxed than the Heart Beats Pacific. We had these songs completely written. There wasn't much to figure out, a little bit more laid back this time. It was a really fun experience. It was cool.

You wrote a while ago that this album will be "Heart Beats Pacific on a completely safe and legal hallucinogen of some sort." What sorts of hallucinogens are you referring to and are they indeed safe?
Yeah, I don't know. I guess I don't really keep up on what those would be but I know you can get certain hallucinogens that I think are legal on the internet. I think, I was thinking, not like peyote grade but stuff that is FDA approved. I couldn't give you a name but those things are floating around and that's what we were going for. I guess…

In an entry you wrote a while ago you mentioned this record will contain 30 percent "weird chords" (aka not power chords). What made you guys decide to incorporate said "'weird chords" in your writing?
The idea was to do something a little bit different but something still recognizable as us. We didn't want to completely reinvent ourselves. We figured we would have the guitars do slightly different things this time around. I don't think if you are listening to the record you would pick up on it necessarily. Basically in prior songs, the guitars has some minor chords, drone notes or things like that when listening you might not even hear. When working on the songs for this album we just wanted to try other different things and branch out a little bit, do things that on a previous record wouldn't happen. In other words, were doing a different chord in this song then maybe we can make the drums go to half time. It's not that technical but it is something to break up the straight forward punk that is in most of our records. I think it sounds exactly like a Banner Pilot album, not earth-shattering. I think, it worked out pretty well.

Is there any special meaning to the album's name Souvenir?
One of the last things we did was name the album. We were gonna to call it Inertia and then after a while we were like "ehh… that was a crappy album name. We got to think of something different." "Summer Ash" was originally called Souvenir for a long time. Basically, I would write the drum track at home and would have to name the file to some random words. Souvenir was one of them. At the end of the whole process we had to name the songs and that song became "Summer Ash." We thought that word could be cool for the album title.

The way I look at it is when you leave somewhere or leave something behind, this is what you take with you when you're done. What it represents may not be an accurate representation of what you left behind but it is what you keep with you. It was not super well thought out to be honest but I think it fits Nick's lyrics and the vibe of the album. I think it works very well.

I really like the album art. Tell me about the art. How does this resonate to the name and tone of the album overall?
The artist's name is Geffen Refaeli, from Israel. I read an article at some point that pointed out this thing she does called the Daily Doodle Gram on Instagram where she has a string of pictures up every day or every few days, she will look at some pictures for inspiration and make a drawing based on these images. I really love her drawing style, it is super cool, really retro in a way but well done. I thought it would be cool to have that style of art work for the record. I reached out to her and asked her if she would want to do that. We kind of kicked around a few ideas based on the title Inertia then we changed the title and had to change gears. So she was working a few ideas for us then she posted a Daily Doodle Gram of a bee. I was like wow that is kind of cool looking. Then I asked her to do a version of that for our record. She re-did the design a little bit and made it more detailed. We ran with it. I'm super happy with it. It was exactly what I wanted, that style and I think it was a little different for us.

How has feedback been for the new album so far?
It seems like a pretty positive reaction overall. What we were shooting for was making the album a little bit different than just a regular Banner Pilot record. We're not gonna do a ska record and drop that out of nowhere. I'm pretty stoked to get out there to play some new songs and get people to like them.

You released a music video for "Modern Snakes." Does the imagery conveyed represent how you see Minneapolis to be? Did you always imagine this song to be a video lyrical music video?
I kind of wish Minneapolis was that cool. If you go down to that part of town it's pretty dull. This just shows that Minneapolis has a rich history. I think the imagery fits the vibe of the song very well. The song is a little bit slower and so is the imagery in the video. It's always kind of cool to do something from your home town. Nick put the video together and it came out pretty awesome. We haven't really done a video before. In early December, we were done with this record. We knew that the album would be out in April, we had time to sit on it and was thinking we should do a video, we never done that before and thought it would be cool.

A song that stood out to me is "Letterbox." Can you tell me a little about writing that song?
That's my favorite on the record. That one was one of the last songs we wrote. Last year, when we were gonna record, we wanted to get the record out by last summer. In the spring, we had 12 songs and we realized we should write a couple more. We wanted different songs, faster songs, we wanted to mix it up. At the time we had kind of plodding mid tempo songs. The last three songs recorded were "Letterbox," "Fireproof," and "Shoreline." The context for "Letterbox" was that I wanted to fill in what the record was lacking at the moment. Something we can do differently that we can end side on. I still think of albums having sides even if you are listening to it on a phone, I still imagine records having a half-way point, something that ends and begins again. It could be a longer song with a drawn out part. A little sadder sounding, minor but faster than the songs we were replacing them with.

I see here that you will be touring a little bit with this album. Do you have any other Tour plans for 2014?
We're doing bigger cities in the Midwest and the east coast. After that, we're planning on doing some dates in the west coast. We would like to go somewhere out of the country either back to Europe or to Japan this time but that might roll out for next year. We're not sure yet, were definitely going to do more touring. Nothing booked yet… We're doing some sort of wrestling show, where we're play the first half of the fight.

Is the band going to fight?
It might turn into that, anything can happen. Maybe we can have some storyline where we get pulled into and turn our guitars around and do something cool. That one should be fun. We're going to do more this year at some point.