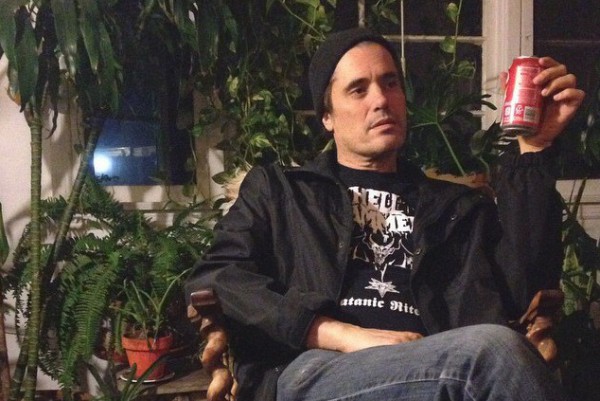 Jesse Michaels is a man whose creativity knows no boundaries. He's created some of the very greatest punk rock ever recorded with Operation Ivy and Classics of Love. He expanded his vision to the canvas, creating visual art using classic noir imagery as tools for looking into the human psyche. He put pen to paper and wrote a novel that examines relations and paranoia. And now, he has expanded his vision to filmmaking.

Michaels' two new short films, Horizon Bastard and Strikeforce: Condor are weird and hilarious. Starring a misfit named Yunkie, the films follow the poor man as he struggles with day-to-day tasks all while trying to conceal his secret power -- the ability to projectile vomit neon-colored slime. The films also have a break out star -- a hairless cat named Patti Smith.

To learn about the films features editor John Gentile spoke to Michaels, the new king of all media, about the movies, Nickelback and how to properly care for a hairless cat.

What was the genesis of these short films?
Well, I've wanted to make real, serious movies, but I figured I should start with ones that are funny and ridiculous because you can make them easily.

What is your process for creating the script?
I just write down whatever I think is funny. This stuff is mostly funny. Then my friends and I laugh about it and that generates the material. Some of the inspirations are David Lynch, Tim and Eric, kind of Adult Swim type stuff. Space Ghost. That kind of thing.

Who is this character, Yunkie? He seems to desperately want to fit in, but he can't, because he's such a unique person.
Yeah, that's exactly right. That describes it. He wants to be cool but he's a very strange guy.

In both the films, the world seems to be very harsh towards Yunkie. In the first one, the woman is grossed out and annoyed by him. In the second one, he goes over his friend's house and they are all really mean to him.
Well, if you don't have opposition, you don't have a plot. It's probably just to make a better story. If he doesn't have anything going against him, there's not much of a story.

In the special effects, Yunkie projectile vomits a form of paint. What is that? Is that house paint?
Well, the first one I made some shit from flour and paint and water, but it was a mess to clean up. If you mix flour with water it just turns into water. For the the second one, we just used kids paint -- non-toxic kids paint. But, I think that I've had it with the paint because it's so hard to clean up.

How do you convince three people to let your hurl paint all over them and ruin their clothes?
Well, John, you just ask them. Most people want to be in a movie. You say, "Hey, you want to be in a movie?" They say yes and then you say, "Oh, it involves the main character throwing paint on you." People do it. I would do it. Fuck. Those guys were great. They're heroes.

You know Jesse, the mechanism that you've just described is also applied to a very different kind of movie and how they get people to do things.
Oh, yes! That's true!

What does it say that you are able to think along those lines? Is that something that we all have? Is it because Jesse Michaels is such a magnet that people will subject themselves to paint just to please him?
No, no, I don't think so! I think it's the power of being on film that makes people willing to do crazy shit.

Let's get trippy. The thesis that we have is that people will go to extremes to get on film. In a way, it is a way of gaining acceptance and love from the viewership. In a way, that is exactly what Yunkie is doing. In the first one, he is trying to gain love from the woman. In the second, he is trying to gain acceptance from his friends.
Well, that's an interesting reading. I don't know if it would be mine… I'm not going to say that there's not any truth in it.

Oh! Well, then would you explain your own art, or, are you of the position that an artist should never explain his own art?
I am of the position that most of the time, whatever the art is, whether it's a funny movie or music, the less explaining the better. That being said, if I was going to explain these movies, they're funny little movies. Though, there is an aesthetic to them. They're not as random as they might seem. We're trying to do something that is a little bit more than pushing creative boundaries than something that is only a comedy sketch.

Your work seems to be next level to me. I listen to bands I love, like AC/DC, and it is phenomenal rock music. But then, I listen to stuff like George Clinton, Lee Perry, Nick Blinko, and your work, and it seems to come from a higher plane, if you will. Do you feel as though your work is from a higher level than most art? Please don't be modest when answering this question.
Well, I feel that when I'm making something on a level higher than myself, in a sense, I go somewhere else and the material seems to come from a higher level. The material may be a higher level, but I can't take full responsibility. I feel like I could never come up with it and it comes from somewhere from beyond me. I don't like to look at art hierarchically.

Take a band like Nickelback, for example. When I was a kid, my favorite band was The Clash. Nickelback might be somebody's Clash. I'm not going to say I'm better than them.

Really?! I would definitely say your art is better than Nickelback. You would never say some art is better than other art?
Well, I would freely admit that I would say I like certain things better. I don't like to talk about things hierarchically, because it might mean something to someone. Maybe there are no absolutes about it, because there are certain bands that annoy the fuck out of me.

People have had a very polarizing reaction to these. Some people are saying it's the funniest thing ever. Some people just plain don't get it. Is that frustrating to you, or is it exciting?

Well, what can you do? Not everybody is going to get it if you have a weird sense of humor. But, the people that do get it seem to really enjoy it, so I focus on the doughnut and not the hole.

Do you think that you are a positive person in general?
No. I am generally a fairly negative person. But, when it comes to moving forward on my artistic projects, I summon my positivity because it is more productive.

Are there going more movies starring Yunkie?
Well, the next one is not going to star Yunkie. I have an idea for one more funny one and then a serious one. The funny ones are easier to make because I can just call my friends and bang it out. So, the next one will not have Yunkie, but I already have the basic idea. We're going to have more stars. The last one had the guy from Urge Overkill. After that I want to do something serious. So, the short answer is that I don't know what I'm going to do next, but it will either be a funny one or a serious one with better production value.

People often associate a work's main character with the author himself. How similar are you to Yunkie?
I would say that we are similar in some ways. It's a character. I have a gentle child-like side, but the difference between us is that, well, it's half and half.

Tell us about the films' breakout star, Patti Smith.
Patti Smith is sitting right here. She follows me all over the house. She is just a great weird little cat.

Is it weird petting a hairless cat?
It's sort of like a peach. She's very soft. She doesn't loved to be petted. I think her skin is sensitive.

When can we expect new movies?
I think I'm probably going to be making another movie fairly soon. Expect more soon. The most important thing is, to any one who watched it, whether you liked it or not, thanks for watching.