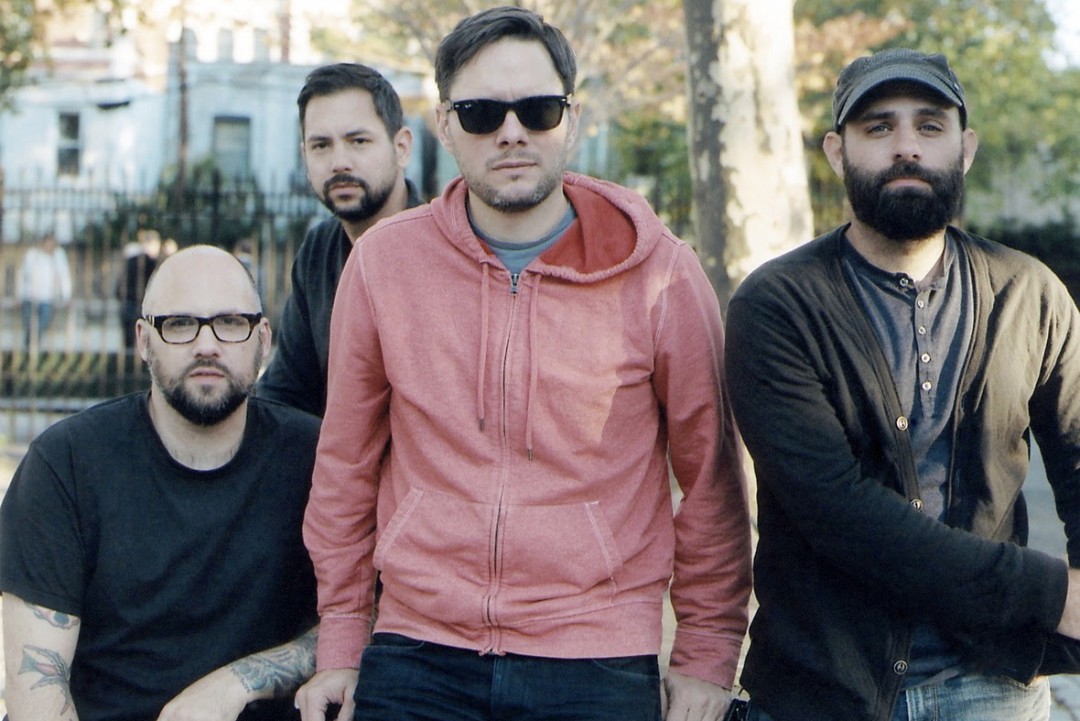 The Jazz June are an influential emo band, active in the late '90s and early 2000s. Now, a decade later, after a couple of shows here and there, the band are finally back as a full-fledged band.

New record After the Earthquake has recently been released via Topshelf Records and shows the band picking up where it left off. Punknews staff writer Max Qayyum had a chat with lead singer/guitarist Andrew Low about the reunion, their views on the so-called â€œemo revivalâ€ and their plans now that theyâ€™re back together.

What sparked the reunion?

We had been talking about playing new music since we reunited for a benefit tour for our roadie back in 2006. However, just after those shows I moved to London and the rest of the guys were really busy with family and work. It wasnâ€™t until about two years ago when Bryan moved to N.C. and really motivated us to start playing music that anything actually happened. We had all been working on songs individually during the years that we were inactive so we started sending around demos. It went really well from the get-go so we decided to get back in the studio and record a new record.

How did it feel getting back into the studio after all this time apart? Was it natural or did it take some getting used to?

It was totally natural. We had a lot of time to work on our individual parts before committing them to tape. The first session was a group of six songs that we recorded at Headroom in Philly last summer. The version of "Over Underground" on the Dikembe split is from that session. We continued to work on demos over the Internet and went into the Gradwell studio in April to record the album. By that point we had been working on the songs for almost two years so the songs fell together quite nicely. Steve Poponi helped us get the sounds we wanted pretty quickly and Evan Weiss also helped with the arrangements and added backup vocals, extra guitar and percussion tracks, keys and organs. We only had six days to track, but the songs were about 75 percent finished before we started recording anyway.

Thereâ€™s been a big â€œemo revivalâ€ scene which has been popular for a while alongside bands such as Mineral and American Football making big comebacks. What do you think about that?

We just played a show down in Austin for Fun Fun Fun Fest with Knapsack and Mineral. When I was watching Knapsack I realized that the so called emo revival is really just people discovering a really good time in music. I think bands like Mineral, Knapsack. AF, etc. were combining the best parts of punk, indie and rock into a sound that has aged really well over time. Things got crazy in the early '00s and a lot of bands started working in really expensive studios with producers that re-styled their sound, but the original emo/post-punk stuff that those guys were making was just fucking good music. I am not surprised that people are still in to it in 2014.

Whatâ€™s it been like getting out and playing shows again?

It has been really fun to see people who we havenâ€™t hung out with since 2000. We have also met a lot of really cool people like Evan and the IIOI guys, the dudes from Beach Slang, Cayetana, Pity Sex, Heartwell and loads of other old and new emo heads who are just really sound people. It is always a challenge playing live because we donâ€™t get to rehearse often since I live in London, but when we pull it off it is the best feeling. To me, playing live is the best type of playing because we can put energy into the songs and not worry about getting all the notes perfect. And the punters get a different experience each time. Itâ€™s also great to mix the new songs in with our old material.

What was the inspiration behind After the Earthquake?

The main inspiration behind the album was resurfacing as a band and The Jazz June evolving into a new phase of our lives in 2014. So much great and not so great stuff happened to us over the past 12 years and we really reflected on it all while we were working on the new songs. We have all stayed really close over the past 12 years but getting back together as a band feels really fun, yet terrifying at the same time. Everything has totally changed and it feels like we are on another planet where the Internet rules the world and you can log on to your phone and find out what people in Japan think of your new music. That is totally bizarre to me.

How was it working with Evan Weiss (producer of After the Earthquake)?

Bryan met Evan at a Their/Theyâ€™re/There show last winter through our friend Tom who runs the Washed Up Emo site. They started talking about the new album and Evan expressed interested in coming on board as producer. He is super busy and always on the road but happened to be free around the time we blocked out to record so it all fell into place. This was the first record we worked on with a producer and I think it was a good idea because we are really happy with the finished product.

â€¨What about working with Topshelf Records?

Kevin and Seth have been really awesome to work with. We met them through a chance encounter on Facebook, but they have been great. They do not fuck around and they get the release out on time. They do a great job and are generally great guys to work and hang with. Mike from Earshot PR has also been helped out a lot to promo the record. I think our new album fits in really well with the other bands on their label so we have found a great new home at Topshelf.

Are you happy with the initial reception to the record?

Definitely. The initial reviews have been really positive. It was really important to us that we didnâ€™t become a Jazz June tribute act, so writing new music that stood up to our back catalog was what we were working towards. Hopefully we have written a record that does not sound like we are trying to rehash a style of music that was popular in 1999.

Do you see it as more of a continuation from where you left off or something completely fresh?

I think it is both. A lot of the songs were written over the past three years, but I definitely revisited a lot of the bands and music that inspired us when we first started out in 1996. I had been playing in a lot of punk rock and garage rock bands since the mid 2000s but at some point I started to miss playing indie rock stuff and began writing songs that were more in the Jazz June style. We all share the same collective consciousness when it comes to music at this point, so it is dead easy to work on music together. â€¨â€¨

How do you feel about your previous records looking back on your career at this point?

As a whole I like them each individually for certain reasons. For instance, when I sat down to relearn songs like "When the Drums Kick In" from The Boom, the Motion and the Music I can remember exactly where I was when I wrote the lyrics. The one thing that is weird is we were super young when we recorded some of the earlier albums so it is weird to have a public version of something that represents a time that we were still very much learning to write songs and play our instruments, but again it is super nostalgic for me. Itâ€™s like the phrase emo, we used to hate it because it was a word that hardcore kids used to make fun of us, but now it is a time of my life that I look back on very fondly.

What are your future plans?

We have a short east coast tour booked with Field Mouse over the winter, and we are almost definitely going to be at SXSW. We are working on some more live shows and festivals but nothing is booked or sorted yet. I am hoping that we can do some splits, comps and EPs, but nothing is planned just yet.