World/Inferno's annual Hallowmas to be online this year 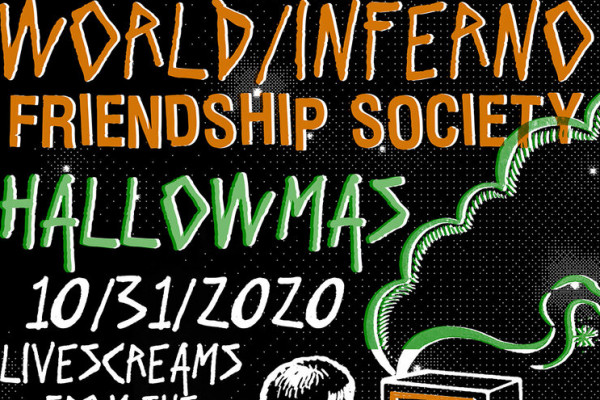 Every year, World/Inferno Friendship Society throws a "Hallowmas" show, which is their biggest and most ornate production of the year. For obvious reasons, a physical show is not happening this year. However, the band is streaming an online Hallowmas event subtitled Livestreams from the astral plane . While the event is not live, the band did state that: "a proper, virtual commemoration of Hallowmas, and we need your participation if we are to raise the Pumpkin, even remotely."

It may be worth noting that the band's first album, The True Story of the Bridgewater Astral League made heavy use of references to the Astral Plane as well as Nosilw Pilf, a character who has recently once again made an appearance in the band's communications. The event is being streamed by the band directly on October 31. You can see a message issued by the band below. You can read more about the event here.

Their last album was All Borders Are Porous to Cats from earlier this year. We spoke to the band about that LP.

World/Inferno
Gina: So what are we going to do now?

Gina: No. I mean with Hallowmas? Is it cancelled? Will this year be the Lostmas that never was?

Jack: Never! Tell the kids to Prepare for ….HALLOWMAS Q!!!

Jack, looking very proud of himself: Eh? Ehhhhh? What do you think?

Gina: Does this have anything to do with Qanon?

Gina: What's the theme? What did the Pumpkin tell you this year?

Jack: Well. I received a vision last night when I was sleeping. An old friend delivered a postcard from the Astral Plane. I couldn't read it, the letters were scrambled. But I saw something.

Jack: The Great Pumpkin is very angry this year! He is an angry pumpkin god. And hes marching through the streets like the Stay Puft Marshmellow Man. Stomp stomp stomp. He is mad at someone for not being sincere. He is tromping through the city. He is a force of nature, like a storm…..
Gina: Why is there an angry orange god when there is an angry orange president? Can we not?
Jack: Well that ends this conversation. Maybe I am misinterpreting the Pumpkin's message that good ol Nosliw Pilf relayed to me last night in a dream. Let me rethink my angry god interpretation.

Jack: Maybe the Pumpkin was sleeping and it was angry you woke him up! It came to me in a dream, maybe that's how we should read it. The Pumpkin is asleep. Maybe we should let the Pumpkin sleep.

Gina : No, Jack! That was YOU! You're the one angry that you had to wake up. Just like every other day.
Jack: Fine. Im picturing Snoopy. The Red Baron. And a WWI era plane fight. ::points his fingers at a cat and makes machine gun noises:: Ratatatatatatat-tat! Take that , Attractive Cat….errr. I mean Red Baron!

Jack: Ok, FINE! I'll make it up and ask Pilf to see if I got it right…… The Great Pumpkin is an angry god this year! He wants to go through the streets and give away candy and destroy police cars. He would never EVER be mad at the kids, because without them, he wouldnt even exist! But like a child, he is against all forms of authority, like police cars and banks. However, he tips well. We need to tromp around and let others know that they should tip well.

The Coathangers to re-issue debut LP