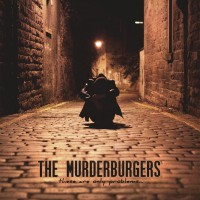 The opening line to the latest full length effort from Scotland`s Murderburgers may well offer an insight into frontman and chief songwriter Fraser`s state of mind while writing his latest pop punk masterpiece, but it certainly does not sum up the state of his band these days. 2012`s "How To Ruin Your Life" was a masterstroke and set the bar for where this band were going, mostly gone were the throwaway pop punk topics that you`d be accustomed to in this genre and in came the darker, brooding, far more personal lyrical content that gave the songs that added edge over others. This is built upon and almost perfected with "These Are Only Problems", you cant help but get involved.

Musically, you can imagine the influences and stylings of these guys. Definite huge nods to the likes of Teenage Bottlerocket, Dear Landlord, Copyrights and of course Screeching Weasel. You would think that over the years you had heard all this genre had to offer, but that`s where this record takes the reigns and sets about surprising you, with brilliant results.

The openers, Another Way Out, Everything is Muted and Brown and Sorry in Advance fly past on first listen but its the replay value of this record that opens up whats really going on. The melodies, the guitar lines and the words pop out all over these songs -

"I don't feel like I'm losing a day every time that I walk out the door
onto freezing cold streets, crushing leaves under my soaking wet shoes full of holes
and although it's not really going to plan, I hope you understand
that I'm just trying to find a way out that doesn't involve tying a noose and kicking a chair"

Hard matter to lace over the top of sugary sweet licks, but its just what makes it so good, makes it stand so far out from a saturated crowd. These song are real, about real things, that a real guy is going through and he wants it to drive his inspiration rather than keep him locked away from the world. Its a triumph on so many levels.

More tough words but again placed over the top of some of the catchiest structures you could ever care for, its genius songwriting, and all you can do is doff your cap, put the needle back and sing along.

All My Best Friends Are Dying, Shades of Grey and Turning 25 Was Shit are all more fantastic additions, with Turning... showcasing a bit more of what Fraser can manage vocally, its great to see that these guys are constantly trying to progress everything about the band, not afraid to slow it down a bit and throw in tight melodies, precision drumming and bass work all throughout, it all just enhances how great this is as a package.

"Christine I Forgive You" is again a bit of a heartbreaker and then closing the album, is a song fast becoming one of my favourite burgers tunes, "My Inner Mental Room." It feels as though this song marks a point where Fraser has managed to come to terms with what he has to do to beat his demons, its the perfect album closer, a real uplifting anthem to bring you out of the darkness the record delves into.
There is so much hope offered up in the lines like -

before finally closing the whole journey with -

Its a real testament to the healing powers of writing and performing music, and its a brave decision by Fraser and the burgers to put it all out there for the world to see, but by doing that the problems faced become the soundtrack to so many peoples good time that it turns all the shit on its head and shows that you can beat this.

The Murderburgers are spearheading a movement in Scottish punk that has never been more exciting. This record is a marker in the sand, its amazing to think of what they have achieved, a Scottish punk band on Asian Man? 10 years ago I would have considered that unthinkable.