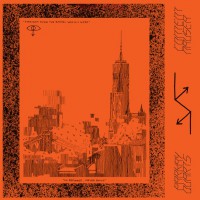 Parkay Quarts is pretty much Parquet Courts, the young NY band composed of equal parts smart-ass stoners and paranoid, wiry David Byrne fanatics, albeit with different rhythm section players, including Bob Jones from Eaters. Unlike Sunbathing Animal, their fairly brilliant 2014 album, Content Nausea feels a little more tossed off and frayed. They recorded it quickly and it shows, as a few of the songs are just electronic noise and basic filler, and there's one "eh" cover of "These Boots Are Made For Walking". And at worst, one can't decide if the neurotic anxiety over digital connection of "Content Nausea" is actually meant to be cliched as a narrative joke or just is (but then the galloping, genuinely exciting riff makes up for it).

Still, at their best, the songwriters Austin Brown and Andrew Savage are giddy, relentlessly freaked out savants tossing out whatever sounds good because it usually is, punk-pop processed through a thick stream of insane monologues and trash rippling around windy streets. They love the music they make and their pure joy, their clear compulsive need to play together, spills over into the riffs and sounds they make.

And the epic final song "Uncast Shadow Of A Southern Myth" is a cousin to their own "Instant Disassembly" and a steady response to "New Age" by the Velvets, a short story of a murderous encounter with an older, broken Elvis Presley. As it builds and builds into twanging solos then the sound of cathartic screams and wa-wa pedals, Parkay Quarts break through into as close as they can get to real, heartfelt emotion. Not bad for a side project/alibi. On the prowling "Pretty Machines", Savage mutters, "Punk songs/I thought they were different/I thought they could end it/No, no, it was just a deception." Maybe so, but if he and Brown can't "end it", they can get through to it, and maybe that's close enough.