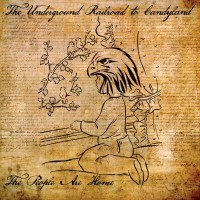 Todd Congelliere is something of a punk rock renaissance man. A one-time professional skateboarder, these days he is not only the brains behind one of the most respected labels in punk rock, Recess Records, but heâ€™s also been the primary force behind a stable of punk bands including F.Y.P., Toys That Kill and Underground Railroad to Candyland. His output, no matter what moniker or backing band, has always been dependable for being catchy yet slightly off-kilter and strange. On URTCâ€™s newest offering, The People Are Home, he continues the trend of crafting deceptively simple, poppy songs in this vein.

Compared to Congelliereâ€™s other projects, Underground Railroad to Candyland has always featured a breezier, almost indie-garage feel to the songs, and the same can be said for The People Are Home. The floor toms take a drubbing as lightly distorted guitar tones crank along with the near-constant gang vocals, giving URTC a fun, punk rock party atmosphere that translates well live.

Kicking off the album is â€œDead Leg,â€ a rollicking good time that encapsulates everything that any longtime fan of URTC or Congelliere would want in a new album. It is one of the more energetic tracks, and gets things off on the right foot. â€œThe Grownups Will Have Their Sayâ€ is a floor tom-heavy banger, as is the following song, â€œYer Not the Only One.â€ As opposed to Toys That Kill and F.Y.P., whose songs often harbor a dark, twisted vibe, URTC is a much more straight-forward pop affair, with the simple intention of making listeners bob their heads and tap their toes along with the fun summer vibes. However, URTC can sometimes come across as a bit one-dimensional in this respect; after a while, the songs, which tend to not stray far from stompy, upper-mid-tempo speeds, begin to bleed together, and while not unenjoyable, do not stick in the memory equally. There are definitely standouts -- including â€œWorried,â€ a song which begins quietly and builds into an energetic chorus, and â€œAnd Now,â€ definitely one of the catchiest offerings on The People Are Home.

Underground Railroad to Candyland are one of the more consistently fun lo-fi bands to crank out the jams, and The People Are Home is par for the course. While not mind-blowing, it is an enjoyable listen from a band that puts on a great show, and a man whose influence in the punk rock world is undeniable.