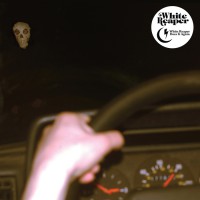 White Reaper Does It Again is 100-percent correct. If you were a fan of their previous EP, with it's poppy garage lean seasoned with curly keyboard lines, then good news: here's more of it. Thirty-three minutes more of it, to be precise. The songs here drip equally with garage rock sweat and teenage bubblegum rock and roll angst. This is the type of music White Reaper excels at and they don't seem particularly keen on branching out. This early in their career, it's not that much of an issue, but this could mark the beginning of the band spinning their wheels creatively.

The front half of the record offers catchy songs like "Make Me Wanna Die" and "Pills" with fuzzy exteriors, sometimes punctured by an overblown shout or a bent guitar string. "On Your Mind" has enough of a Weezer-like stomp that it would probably fit pretty comfortably on that first Surfer Blood record. Comparison to that band as a whole might not make the most sense sonically, but they could follow similar paths on future albums. Surfer Blood didn't really evolve past that first record, instead retreading their sound to diminishing returns. White Reaper, though too early in their career to really tell, seems like they're headed in the exact same direction.

Late last year, I saw White Reaper open up for label mates Deerhoof, and their live shows had enough exuberant energy to give the headliners a run for their money (and approaching Deerhoof levels of childlike energy is no small feat). This record supplies plenty of fuel for those shows and I can only imagine standout tracks like "Don't You Think I Know?" and "Candy" sound excellent in that setting. However, after a few spins on record, the songs all start to sound like equal parts in a darkly colored cotton candy whirlwind (which, yes, sounds fun, but it doesn't bode well for track distinction).

"Friday the 13th" is one of the few tracks here to stray from the pack, sporting an eerie synth-line that John Carpenter and Umberto usually build worlds out of. Unfortunately, the track is all too brief and it is back to business as usual on "Wolf Trap Hotel." White Reaper Does it Again ends "B.T.K." The track is a real stomper, throwing a large hook around with reckless abandon. It's a perfect example of White Reaper does. And while it may be easy to worry about where this band will go from here, it's a whole lost easier to sit back, relax, and enjoy the whirlwind.

Annabel: Having It All