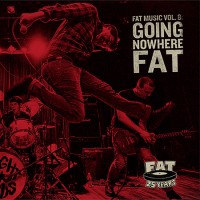 For 25 years now Fat Wreck Chords has been a providing the punk scene with phenomenal releases that have influenced and inspired a countless number of punk rockers to start their own bands. If you are into punk rock, chances are at least one or two bands you listen to are or at one time released something through Fat Wreck Chords. The label is still thriving even ten (or so) years after the music industry had the rug pulled out from under it by the internet and it is still one of the biggest independent record labels around.

Slowly over time, the label has successfully been able to branch out and include bands that may some how be related, donâ€™t necessarily fit that â€œFat Wreck soundâ€ mold while still releasing material from bands that do. Because the label has been able to do this so effectively, their roster has only gotten progressively stronger and more impressive over the years. And the label did an absolutely great job of showing their wide-ranging band roster off with itâ€™s new compilation Fat Music Vol. 8: Going Nowhere Fat.

But letâ€™s get to the really exciting stuff first. And by that I mean the new and unreleased material that is on this comp. Of the 25 tracks on Going Nowhere Fat there are six tracks that we have not heard before. Three of them are unreleased tracks from Western Addiction, Swinginâ€™ Utters, and a demo of an unreleased song by NOFX. The other three of those tracks are from bands that have upcoming albums that will be released by Fat Wreck Chords in the not-too-distant future.

The first new track on here is called â€œSnowflakeâ€ and it is by PEARS, Fatâ€™s newest band. They have said that they will have some new material out relatively soon, but nothing official has been announced yet. If you were really into Go To Prison, you will be more than excited with â€œSnowflake.â€ PEARS took the Ramones-core style, but incorporated their fast and abrupt changes that have become known for into it. The vocals in the verses are just as angry as ever and the chorus melodic and anthemic. Itâ€™s exactly the kind of song PEARS do best.

Another new track on this comp is â€œLeft in the Middleâ€ by Night Birds, which will be on their upcoming Mutiny at Muscle Beach that comes out on October 2, 2015 and is one of the most anticipated releases of the year. If you havenâ€™t heard this track yet, you really need to check it out. Itâ€™s got the Night Birdsâ€™ â€˜80s surf-punk influenced instrumentation that has a wailing guitar solo that just doesnâ€™t quit. Lyrically, the song is out of the norm for them because it is so overtly political. Itâ€™s an interesting move on their part and they pulled it off extremely well.

We crack rock steady fans have been waiting over ten long years for a new Leftover Crack album. The time is fast approaching that we will finally get one. Constructs of the State will be out on October 30, 2015 and Going Nowhere Fat gives us a small look into the album with the song â€œThe Lie of Luck.â€ The overall sound of this track treads on the cusp of Leftover Crackâ€™s lighter sound and Star Fucking Hipstersâ€™ darker sound. It is not a ska-punk song, but it is one of their thrashier (think â€œBanned in P.C.â€) and more octave-heavy songs like â€œAtheist Anthemâ€ or â€œClear Channel (Fuck Off).â€ Sturgeon still leads the band with his crusty mid-range vocals and screechy, high-pitched screams. It really is like they picked up from where they left off despite the line up changes.

These three of these new tracks should give us all confidence that these highly anticipated releases will be absolutely fantastic.

What makes the rest of Fat Music Vol. 8: Going Nowhere Fat such a fantastic compilation is not only the new and unreleased tracks, but also the fact that the there is really something here for everyone. It spans from pop-punk to crust punk and hardcore, while hitting everything in between. If you like super melodic pop-punk bands there is â€œOne More Chanceâ€ by CJ Ramone and â€œNightmareâ€ by Bad Cop/Bad Cop from this yearâ€™s Not Sorry on this compilation. If you are into ska the Mad Caddies and Less Than Jake both make appearances on this release. If you like the more anthemic punk rock you can hear Morning Gloryâ€™s tune â€œLifeâ€™s Long Revengeâ€ or if folk-punk is more your thing there is â€œStupid Todayâ€ by Old Man Markley. Some bands on this comp are more modern like toyGuitar and PEARS and some are more seasoned musicians like Lagwagon and Strung Out.

You get the point.

But again, Fat Wreckâ€™s catalogue has such a wide span of different sounds and punk sub-genres on it that there is bound to be something on here for everyone. You may not love every single track, but this compilation reflects the labelâ€™s current line up very well. Between that and the newly released songs, this is the best compilations that come out in a long time and one of the best releases of 2015.