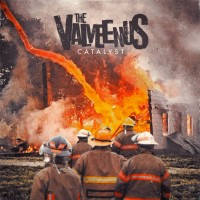 For a Punk Rock band to last 10 years is quite an impressive feat. Especially when you take into account the DIY efforts a lot of Punk acts try to loyally stick to, good times or bad, sometimes it just does not work out.

The Valveenus are an fine example of making it through it all. Forming over 10 years ago in 2004 in Orleans Ontario, a suburb of Canada's capital Ottawa, the years of touring along the likes of The Real McKenzies, SNFU and Gob have not worn them out from continuing what they do best without the help of any label even when at this point they could very well sign to almost any independent punk label in the continent they wished.

Their latest release, Catalyst, is a testimony to this. A familiar dose of Canadian Punk Rock that is quite refreshing at the same time. The drums are tight, Guitars have that perfect distorted tone mixing with the Bass and Vocals are clearly projected in the energetic, gritty emphasis reminiscent of any Fat Wreck Chords band during their hey-days in the 90's.

Starting off the release is "Hold On Me" with a short voice sample followed by the band blasting through right into your eardrum. The lyrics describe some sort of old relationship that seemed to have fallen apart and the singer is lamenting over it but in a more happier way, if you will. One song in and the pace has already got me hooked on the chorus, the years of playing and writing for these guys really pays off.

Along comes "Misery" with a very folky sound to it, kind of like a Flogging Molly track ("Salty Dog" anyone?). There's nothing wrong with adding a bit of harmonica and super fast acoustic guitar playing followed by the whole band coming in. Listening further into this song will remind you of Dropkick Murphys but a Canadian spin to it- so in essence, Â The Real McKenzies. It Â kind of makes sense considering they have shared the stage with them, their sound really must have rubbed off onto them in a good way.

Continuing into the release you'll find a cover of Simon and Garfunkel's No. 1 hit "TheÂ Sound of Silence." A classic track whether you like punk rock or not, this cover totally rips. The fast beat and harmonizing vocals really bring out the uniqueness of this cover as opposed to other versions you may have heard. Even when you put a Punk Rock spin on this song it still resonates with you in the same way the original would with it's deep connotation and the guitar solos hit that final climax perfectly.

The Valveenus bring out the bestÂ of Canadian DIY Punk Rock. The music speaks for itself when you listen to it and the band shows no sign of wear and tear even after all these years. Most other independent bands either break up or fade into a non-existential fate that leave people forgetting who they are but not these guys, they're still playing and are looking to continue this way.