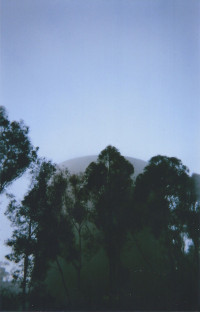 From the spiky electricity of Summer Vacation's Condition, to the aggressive minimalism on Winter Break's self-titled record, Mark Chen and company continue to cultivate a storied catalog of songs that agitate and excite with each successive release. Through mutating structures and intensely personal lyrics, the heartbeat of each song remains the same: high energy, visceral, punk rock. And it is with this same verve, this same passion that Chen delivers what is undoubtedly his most haunting suite of music yet.

Everything Made Obsolete is the debut release by Heritage Unit, but it wastes no time with introductions. Immediately, you are transported into this sonic nightmare with sharp bass lines and even more vicious drum breaks. The dynamic interplay between the unrelenting guitar and bass melodies are at the center of this record - constantly vacillating between time signatures of various speeds and tempos.

It's the architecture of these songs that deserve the spotlight. Chen eschews conventional "verse-chorus" structure in favor something more jarring and abrasive. Being under attack by so many sounds at once, it's easy to get lost in the paranoia. Each song evolves and shape-shifts throughout it's duration - never quite focusing on a particular melody or hook. Instead, the songs on this album wash over us in frantic movements; struggling to communicate one idea before moving on to something else entirely.

This madness characterizes a powerful undercurrent of anxiety, confusion, desperation, and fear. Unifying themes underscored by the intimidating cover art - a silo, or unidentified object hiding in the trees. Never out of sight, or out of mind.

Chen and guitarist Omar Romero trade verses in tandem shrieking, cementing this notion of anxiety. Of uncertainty. The vocals punch their way through the noise and panic of Taylor Jewell's frenetic drumming, adding to the sheer discordant chaos.

What little breathing room there is on this record comes about halfway through with "piss angel bathroom magic". This is quickly cut short as the slow, steady guitar riff gradually builds and builds to an explosive climax, illustrating the inevitability of decay; everything made obsolete.

With an album that's as dense as it is direct, Heritage Unit carves out another hellish dimension within the screamo genre. It's an album that's unconcerned with grooves or rhythms, but emphasizes catharsis. The raw energy that drives this record is disturbing without being alienating. To peel back these layers of noise and anxiety is to isolate the true artistry behind them. This album, while easy to dismiss, remains a confident and all around mind-blowing experience.

Sanction: The Infringement of God's Plan