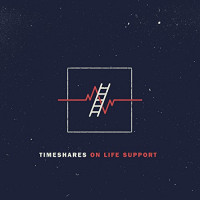 It seems over the last half a decade, Timeshares have been on the bill for an untold number of shows I’ve attended. Whether making their way through dive bar tours of the Midwest or headlining over local bands in Philadelphia and the tri-state area, they’ve been in the periphery of many of the Punknews community’s favorite bands. All of their albums have received very favorable reviews on the site. However, the band was one that while I enjoyed them live, never seemed to click on record hewing just a little bit too closely to the Orgcore formula. With the recent addition of Maxwell Stern of Signals Midwest and a new, self-released 4-song EP titled On Life Support, my interest was piqued to give them another try. And I’m glad I did.

On Life Support Support immediately kicks off with a more laid back sound than on previous albums. “On Life Support” is a 4-minute mid-tempo jaunt diving into the fragility of straight white male ego. It is worth listening to this song while reading along with the lyrics and explanation of the song on their Bandcamp page which address the subject in a very thoughtful way. The song immediately calls to mind a more energetic Drive-By Truckers with keys giving additional texture to the band. The keys are a welcome addition to their sound and make an appearance throughout the duration of the release. While Timeshares have always had an alt-country kick to them, they allow these tendencies to more fully breathe on On Life Support.

Second track “Anxious and Angry” is the song closest to the sound of their old records. It’s a straightforward rocker that ends with Mike Natoli singing out his anxiety with the relatable lines “I don’t think I’m coming out to play/it feels like starting over every day.” “Bat City” and “Ladder” brings out even brighter shades of Lucero with their acoustic and electric guitar interplay and country-influenced solos. The latter opening with Jon Hernandez’s vocals and acoustic guitar reflecting on his relationship with his father.

On Life Support is meant as a taste for their upcoming record. If the songs contained here are any indication of what to expect, we are in for a treat.

Swingin' Utters: Drowning in the Sea, Rising with the Sun