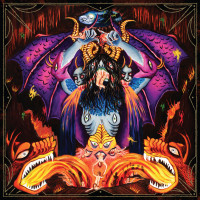 With their capes and corpse paint and occasional drac-teeth, Devil Master suggest that they’re vampires, creeping through the night, preying on the unsuspecting. Except, Nosferatus mostly suck life from unsuspecting victims without really adding anything into the equation. And to be fair, Devil Master, on their debut album, the perhaps pointedly serious/perhaps whimsically named Satan Spits on Children of Light, do draw their power from other sources. Satanic-Japanese hardcore freaks Zouo gets thrown around a lot, and it’s a fair buoy. But there’s also a lot of Discharge charging here, NWOBH power riffage there, Venom-esque solo-ing there, and good ‘ol spooky fun all around. To that end, by drawing on so many different sources and stitching them together, Devil Master are more Frankensteins then they are Bela Lugosis.

“Black Flame Candle,” opens with an iron fist opening smash before ripping upward into some classic Judas Priest style blazing, only to switch to some black metal meets burning spirits distorted howling. As is their style, the lyrics themselves are mostly indistinguishable howls and growls and hisses and that’s kind of part of the fun. Unlike some other left hand path bands, that seem like they’re playing dress up, Devi Master, who actually do admit to playing dress up, seem completely genuine and alien in these deliveries. There are walls of distortion, piles of blown out mics, and waves of solos wedged between the band and the listeners ear. That strategy makes it seem like the band is reaching out across some cosmic chasm and the message we receive has been acid-washed in hellish psyche-waves. With titles like “Black Flame Candle” and “Nuit” (an Aleister Crowley compound deity) you get the impression that this crew revels in the occult and evil, but wisely, instead of spelling everything out, they let their evil sonic texture do the talking. I don’t know what “Her Thirsty Whip” is about, but it’s scary, and isn’t that really the point? You don’t actually see that many ghouls in Wicker Man or Rosemary’s Baby, but they’re basically the most haunting movies there are.

All that being said, the band is clearly making tactical strikes here. Sure, between the endless ripping soloing, the pyramid sized crushing bass, the demonic vocals, the pounding drums, and the haunted house keyboard, sonically, there is A LOT to take in here. It seems like every sonic square here was crammed with sound, and interesting, those sounds don’t always gel. “Skeleton Hand” herks and jerks, throwing you off balance throughout the track. “Gaunt Immortality,” which opens with a rare bit of open space before dropping the hammer with a soaring riff and double timed drums, melts from one song into another halfway through, keeping you on your toes.

In making these tracks so much to take in, Devil Master seem to be making a point. Yes, Zouo’s not-quite-right-in-the-head Satanism is here. Discharge’s relentless energy is here. But, the message isn’t “Zouo” is cool! It’s not “Discharge” rules! Rather, the band takes what might be semi-disparate genres, and stitches them together with the tissue that connects them all. In doing so, they’re not paying tribute so much as furthering a dark thread that seemed to sprout from separate sources at the same time. At once, they’re making a point about how a certain dark revelry pulsates through outsider music all while making a new statement from previously used parts. Also, they are rocking out.

If you’ve ever read Mary Shelley’s Frankenstein, then you know that while the monster is portrayed as a big dummy in the movies, in the book, he actually uses his refashioned parts to not only equal what came before him, but far surpass it. He’s thoughtful, articulate, well read, and also, somewhat vindictive due to the fact that he was brought into a world fashioned to hate him. I bring this up, because, surely, there are those out there who will look upon Devil Master in their $3.95 capes, giant spiderweb set prop, and corpse paint, and think this a group of six heavy metal buffoons. But, you know, and I know, that there’s more to a monster than a gruesome head. In fact, sometimes the brain inside head is the most horrifying part, especially when it’s clever… and when it knows that it can manipulate based on appearance alone….

Captain Asshole: What An Awful Life