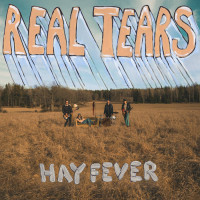 A while back I was looking at some music on Bandcamp and found this record from 2016 with a cool cover by a Swedish band called Real Tears. For whatever reason, I got the impression that they might play a bunch of Ramones-inspired stuff. I took note of it as something to come back to, but never ended up doing so. More recently, a new record, Hay Fever, has seen the light of day.

So my Ramones perception was off base. I’ve seen lots of comparisons to the Undertones, and I hear that. Maybe even a bit of Buzzcocks. But even more so, I hear a lot of Dickies. Catchy hooks, blistering speed, and trebly guitars and vocals are the name of the game here. And it’s done well.

Hay Fever opens with a couple of great rippers, “Violence Of Your Love” and “Crooner Steel”. Each follows a pretty similar formula, with trebly and swaggering guitars, muted during parts of verses, and driving hooky riffs during the choruses. The vocals sound reminiscent of Leonard Graves Phillips and the melodies are what pop punk dreams are made of. Later, other songs double down on this sort of formula. “These Unwashable Hands Of Mine” could be the soundtrack to a panic attack as it pulls these tricks behind some lighting fast rock and roll. And “Rainy Day” will seem pretty basic during the early stages, but when the chorus hits, you’ll find all the sugary goodness you can take.

As great as these songs are, there are a handful that hit even harder. “Dumpsterdivin’” and “On We Go” both mess around with some really nervy guitar, quick drums, and hooks in the respective choruses that’ll sink in deep. Both are fantastic. And my favorite, “Squarejerker”, toys with some nearly surf guitar that fits Real Tears like a glove. Mix in some great lead vocal melodies and toss in some “ooh’s” and “aah’s” backing vocals, and you’re left with a next level song of pop goodness. And it keeps moving along quickly, to boot. It’s pure energy.

Hay Fever is loaded up with this good stuff, and I’m happy to report there’s not much of the bad on here. A couple of songs don’t provide any lasting charge for me (“Beers On Mars”, “Enough Of You”), but none are garbage songs either. Just a couple of shoulder shrug moments. I can live with that.

All-in-all, Real Tears is serving up a winner here. Hay Fever hits the mark most of the time and will remind listeners what good pop punk is all about. Certainly a record worth checking out.