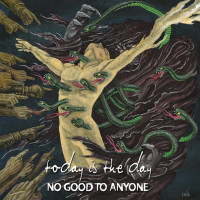 Today is the Day

Today is the Day might be the most underrated band in underground metal. Since the early ‘90s, Steve Austin and a rotating cast of side men have been cranking out corrosive and compelling noise. Their 11th proper full length, No Good To Anyone, is no exception. Austin has never been afraid to experiment and make drastic changes from one record to the next. Each individual record has its own feel, while somehow still sounding completely like Today is the Day. No Good To Anyone feels like a natural progression from the last record, Animal Mother (2014), which found the band in full experimental mode.

No Good To Anyone is one of the band’s most accessible albums to date. It’s almost a rock and roll record compared to the more extreme Today is the Day material. Austin has spent most of his career using his blood curdling scream to perfectly convey pain and hatred. You can feel his unbridled rage rattle your bones. On occasion, he has also explored the depths of sorrow. 2002’s Sadness Will Prevail is a double album devoted to the subject. The new record revisits some of those dark themes and moods, while also incorporating slight elements of the band’s more spastic, grindcore influenced material.

The title track is a seven and a half minute slow burn that starts things off and sets a relatively mellow mood, at least by TitD standards, before kicking into high gear. Austin spends a good portion of No Good To Anyone singing in the lower part of his vocal range. At least within the context of noise metal, the record has a refreshing amount of sonic variety. By picking its spots for extreme heaviness, it makes those spots have that much more impact. Highlights include “Attacked By an Angel”, “Son of Man”, “Burn in Hell”, “You’re All Gonna Die” and “Born in Blood”. There are also a couple of short musical interludes that give the listener’s ears a brief reprieve. Every song feels like it has a purpose. Things are bookended by the haunting and satisfying eight minute closer “Rockets and Dreams”.

Some Today is the Day records pummel you from start to finish, and there’s nothing particularly wrong with that. The best TitD records lull you into letting your guard down and then mercilessly pummel you from out of nowhere. Temple of the Morning Star (1997) does that, and No Good To Anyone does that. Austin is a visionary, but ultimately his vision is too extreme for most people. Especially most mainstream metal fans. If you’re looking for some challenging listening, you can’t go wrong with Today is the Day. No Good To Anyone would be a surprisingly good place to start.