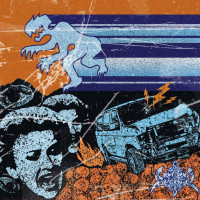 The Sawtooth Grin formed in 1999 and were part of the early 2000’s Grindcore/Mathcore scene. They were highly influential in the making of what is now called “Myspacegrind”. Do you remember from around 2003-2009 when Myspace was the place to find the most outrageous, extreme music at the time? Music that was spazzy, sassy, and nasty? Do you remember early Deathcore? Early Grindcore? Cybergrind?

Well take a minute or two or three to read about this, now nostalgic period in the early days of what we call “The scene”, and “social media”…

The Sawtooth Grin broke up right as Myspace started taking off. Back then Myspace was the place to find new music for most kids who were getting into the internet playground. Makers of band profiles on Myspace would dedicate their time to putting together brief biographies, pictures, and various tracks of their favorite artists if they happened to not be around anymore. If a band was currently active, they would most often put together their own page and list tour diaries, tour dates, links to merch sites, demo tracks, and sometimes rarely, their own produced cd’s or 7" inch to sell on tour.

Tracking down some of these now cult-followed bands album releases are extremely hard to come by. Most were produced in low numbers and sold at local shows or small tour runs or never sold at all and left as various mp3 ghosts. If the band was lucky, they might get signed to some very small obscure indie label and get a one-time nationwide release. Most often they were left having to go the DIY route and building up their clout that way.

In comes indie label Wax Vessel Records in Chicago. They are a miracle maker. What started as a passion project to get these forgotten bands re-released on vinyl and ushered into the current day stratosphere of kids needing a teaching on what was awesome back in the day, has blossomed into one of the highest regarded labels around. Every release by WVR is amazing and the quality and care put into the production of the records is awe inspiring. The label is also a big supporter of the bands themselves and all proceeds go directly to the artists.

I never heard of The Sawtooth Grin until WVR issued their debut album Cuddlemonster back in 2019. I was already aware of the label because they released vinyl for my local favorite Grindcore band Destroyer Destroyer, who I did not think anyone outside of Oklahoma knew of. Unfortunately, the very limited amounts of records produced for Sawtooth Grin sold out within an hour (all releases these days sell out within SECONDS…), so I wasn’t able to get my hands on it. Seeing as how quickly it was snatched up, I knew this band must have had a deep following.

Now as for the music itself, well… Let’s just say that it’s the most abrasive concoction of insanity ever made that wore tight pants and white belts. The 15-minute runtime of this one album the band created speeds by so quickly that it will snap your neck and make it spin faster than Linda Blair. It’s amazing just how crazy this sounds, and this was released way back in 2001. TWO THOUSAND AND ONE!

Besides the mathy squall of the instrumentals themselves, hearing lead singer Rich Lombardi “scream” is something out of this friggin’ world man. Seriously, once you hear this guy scream it’s all over. The closest comparison to Rich Lombardie for me will be the legendary Jon Chang of Grindcore pioneers Discordance Axis. Even then these ear-piercing vocals seem unhuman. I would expect these to be done in an anime or something eviler. Perhaps like a rabbit being killed by a night owl or a rat squeezed by a trap.

I can’t describe each track because it feels like there aren’t any tracks. The music is more like the painful process of passing a kidney stone while also having a screwdriver pushed through your ears like that one zombie scene from Dawn of the Dead.

Members from The Sawtooth Grin went on to play in The Number 12 Looks Like You, Horse the Band, Cloacal Kiss, and Snake Baptist. If you have even one ounce of curiosity, I suggest you give this a listen and let it unsheathe over you and then go take a bath and scrub everywhere.

Thanks Wax Vessel Records for bringing back the obscure relics we all forgot we liked!