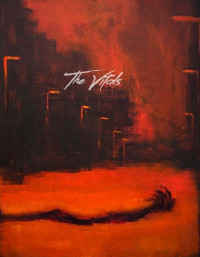 The Vitals latest release 'Anesthetics' brings forth a new sound from the band that reflects it's album cover in a pretty distinct and accurate way. Whether it's sound and message is a testament to the times we're currently experiencing, well, that may just be a matter of opinion when you take the time to really look into it.

Hailing from Winnipeg, Manitoba, Canada – hometown of punk rock legends Propagandhi, these guys prove no matter how cold it is or how far you're from, Winnipeg continues to deserve a spot on the map that punk rockers can appreciate and recognize for it's contribution to the genre.

Albeit drifting away from the more punk sound of their last self-titled release from late 2016 (not counting the single Drop Dead from 2019), this E.P. isn't necessarily something that's to be missed. The band seems to have matured their sound and really found their identity as this release has a pretty consistent sound that really experiments with some post-punk/post-rock vibes to it in addition to punk rock. I guess a six year difference will do that for most people, both in a manner of personal and musical matters.

You can't necessarily blame them either for the change, as from start to finish the E.P. sucks you in to an experience nothing like quite before. The guitars give off a Bloc Party feel which combined with the vocals and drums you almost get a U2 vibe in some ways. Now I know we're at Punknews here and mentioning U2 may be a little blasphemic but when you honestly listen to Deathcake you can't deny that it all really meshes well to a Joshua Tree era of the group in a lot of ways, with a dark twist of course.

Moving forward from what may dissuade listeners, the next three tracks Fennestella, Hill of Frogs and No Soul offer what seems to be as mentioned prior a good homage to Bloc Party, somewhat of a similar tune to Bloc Party's track Banquet. No Soul shines particularly with a danceable, radio-friendly tune with some sweet guitar licks that compliment the vocals and doesn't try to fight it for the spotlight the entire time - shame that it's also the release's shortest track at a little over two and a half minutes.

The release's eponymous track has a post-apocalyptic vibe to it during it's entire run. Nothing short of a dreary feel of hopelessness, really amplified with it's high-tone guitar licks complimented with it's reverb-esque touch. Without much other information, you may as well have thought this to be part of some Jean-Michel Jarre record, with the absent vocals and production value but nonetheless it's a fitting track for the release.

Overall, the E.P. is a pretty solid release from this 4-piece outfit and the band chose a path most others would typically shy away from to stick with a familiar and safer sound. Taking inspiration from 70's punk and 80's goth influences went a long way with The Vitals for this release and it's a curious thought to see where it might take them yet when they do decide to follow up with another release in the future if that's in the books for them.