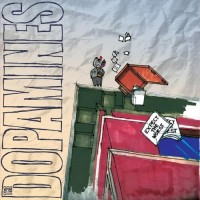 Somewhere between crushing depression, inhuman cynicism, cutting wit and the faintest glimmer of hope exists the thinnest tightrope. This tightrope is traversed only by the most experienced of traveler, and only when that traveler has the support of amazing melodies and harmonies to balance their journey. One false step and you fall head over heels into a depressing mess or, worse, some trite "everything happens for a reason and will be okay" anthem of false hope. It is here, on this tightrope, that the Dopamines' Expect the Worst not only lives but thrives. The Dopamines have settled in and practically built a house over the void–nay, not just a house, but a house with a delightful breakfast nook so they can spend every morning staring into the chasm of despair and enjoy the view.

It would be easy for Expect the Worst to be nothing more than a bland, one-note album about the onset of early adulthood angst and depression, but there are some key factors that keep it from being so easily classified. The first is the undeniable bounciness of the record as a whole. Expect the Worst has so much energy it's likely there will be more than a handful of listeners who love the album and have no sense of its darker tones. The bouncing melodies and perfectly paired harmonies will make you surprised to find yourself singing along to lines like, "Can you hear it? It's the sound of a failure, while everyone else succeeds." It's the perfect layer of sugar to help what could be an otherwise bitter pill go down.

The second, and maybe more important key component of the success of Expect the Worst, is its sheer inability to wallow in any sort of self-pity. Plenty of times the Dopamines sing about constant downers such as clinical depression, frustration and feelings of inadequacy. That said, they never regress to the indulgence of self-pity or constant second-guessing. No sooner will they acknowledge their own shortcomings and problems before they respond, "But unlike you, I guess I got nothing to prove. You keep weaving through traffic, and I'll keep huffing exhaust. 'Cause huffing exhaust beats braking for assholes." This isn't an album about bemoaning one's lot in life–it's about knowing what's wrong but knowing it's better to realize you're waist deep in shit than to actively deny being neck-deep.

While not revolutionary in its approach or content, Expect the Worst takes the best from predecessors and contemporaries (bands like Off with Their Heads and Toys That Kill) and combine it into one complete offering. It's fast, catchy and fun without being trite. It's dark and personal without being self-pitying and corny. It's the kind of record serves as the soundtrack for sitting on your front porch throwing former idols into the chasm of goals you never achieved, just to see the splatter the make when they land. When the record stops and you have to flip it over, you'll pause just long enough to think, "If you gaze into the abyss the abyss gazes into you... Probably because the abyss wants to complain about shit. Screw you abyss."