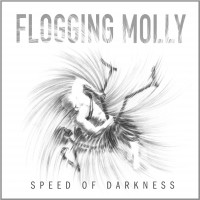 While I have been a Flogging Molly fan for about a decade now, I have gone through the same hem/haw scenario over every album post-Drunken Lullabies (2002). More specifically, I'm waiting for this band with a very niche sound to start sucking. While I would never dismiss Flogging Molly's Irish folk punk as a novelty, I certainly understand why others would. FM has dropped four great records so far, but there's only so far they can take their amped-up Pogues worship before they hit a wall.

Speed of Darkness is that wall. It's doubly unfortunate, given that it's the band's first self-released record since Alive Behind the Green Door back in 1997. But the album just can't find a clear direction, despite many tunes exploring paths beyond the traditional FM style. While some tunes repeat the super-fast, super-Irish route like the opening title track and "Saints & Sinners", a decent chunk of the record actually goes towards new territory.

The album's first half is stronger. "Revolution" is a jubilant working class anthem with an insistent bassline. "The Heart of the Sea" has a really catchy cut time break in between verses. It's actually a bit of a surprise coming from Flogging Molly, since slowing down isn't really their deal, but the groove is infectious. Also enjoyable: the folksy duet near the end of the album between frontman Dave King and wife/violinist/tin whistler Bridgette Regan on "A Prayer for Me in Silence". It's just cute.

But Speed of Darkness doesn't have enough of those successes. The album's second half is too heavy on slower tunes. "The Cradle of Humankind", for example, is a lengthy, dull piano ballad. A surprise coming from Flogging Molly certainly, but good luck with that one live. At the same time, the new songs that mimic old material pass by without much notice. Granted, punk rock has a limited number of moves, and a subgenre with the genre like Celtic punk has even fewer, but it's still weird to finally, finally be disappointed by Flogging Molly. While I'm sure plenty of fans will still be on board with the band's latest, I think I need to sit this one out.

The Dwarves: live in San Francisco