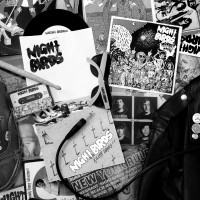 Ah, thank you to the guys (guy) at Grave Mistake for having the forethought to release this compilation of Night Birds' early releases: three 7" singles and a demo. Although vinyl is wonderful, to have all these songs on one handy shiny compact disc makes life so much easier and also acts as a very good starting point for anyone interested in this band. Featuring members of the Ergs! and Psyched to Die, Night Birds manage to combine elements of both those bands whilst adding in a whole new facet that brings to mind 1980s Southern Californian hardcore and then liberally throwing in a twist of surf guitar that occasionally brings to mind East Bay Ray in the Dead Kennedys heyday to create a totally ripping suite of songs.

With snotty–but not overly so–vocals and a retro sound that retains some modernity to it, this collection buzzes along at a fair pace with a lyrical output that is both humorous and, at times, plain silly. Opening track "Killer Waves", from the single of the same name, starts with a rush of vigour that really doesn't drop across the 15 tracks.

"Thrilling Murder" describes how a variety of people who cross the singer cause him to lie awake at night thinking up ways to commit a thrilling murder! I'm sure we've all, at one time or another, got really wound up and/or annoyed by someone and wanted to exact revenge, but I for one have never tried thinking of a gripping way of ridding myself of that person.

Other songs that stand out from the pack include "Bad Biology", "Midnight Movies" and "The Gift Givers", although that should not detract from the other tracks which makes this collection such an essential must have if you like snotty punk rock. They remind me of when I heard the first Screeching Weasel album–it was raw and urgent but it also had massive chunks of melody and catchiness that slammed into my head as I listened to it. Now that the Weasel have gone off down the route of producing a fairly uninspiring album, then the Night Birds should step into the boots of that band and conquer the world with this and future releases.

With 15 tracks on offer and nary a dud in sight, with even the demo tracks having their merits, this should be on everyone's list of things to buy in 2011. If it does get included on your list and the purchase is made, you will no doubt be then adding Night Birds' soon-to-be-released debut long-player, The Other Side of Darkness, to music that you must own. In fact, if you can't be bothered to get ahold of this collection, you should still be looking to purchase the album as Night Birds are that good (but you will kick yourself or deserve to be kicked for not getting Fresh Kills Vol. 1).