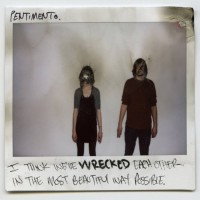 I was born in Buffalo, and so was my father. I'm forever attached to the city, its incredibly friendly population, its wealth of incredible bars and restaurants, and of course its for-the-love-of-god-can-one-of-these-teams-please-win-a-championship-so-my-friends-stop-hassling-me sports franchises, the Bills and Sabres.

Lately, though, something else has kept me attached to the Queen City.

Buffalo is rife with up-and-coming punk and hardcore bands, and Pentimento is one such act. This young four-piece is able to capture not only the unbridled enthusiasm and upbeat nature of Western New York, but the spirit of punk stalwarts Hot Water Music.

The young four-piece dropped their debut EP Wrecked back in April, and it won't be long before people start to take notice. The mix of youthful exuberance and a seasoned sound is a welcome one; what could quickly become rehashed or derivative throws plenty of little surprises at you to keep the six-song EP fresh.

The effort begins promisingly with the mid-tempo opener "Rules of Attraction", a song that employs some neat drum fills and dual-layer vocal delivery to keep the progression interesting. And that's a rawness, a real tangible level of passion that rips through these songs. A visceral awareness that permeates every layer of Pentimento's music. When the vocals rip back into "Rules of Attraction" about two-thirds of the way through amid a cascade of distortion, it creates an energy that carries through the EP's duration.

In short: this band just does not let up.

Even on the album's longest track, the five-minute "Maybe, Just Maybe", the energy that had been building from earlier is present. The vocal-centric effort puts choruses at a premium, but the riffing underneath is still busy, and the drumming is still dynamic enough to be at the forefront of what the band is doing. It's the most pop-punkish song on the record–and a slight departure from the muddier sounds of the other five tracks–but it still works because it still highlights the band's considerable strengths.

There's just a lot to like here, especially when considering how new the band is and how much they have left to grow. A brand-new deal with Panic Records should help them do just that. Keep an eye out for Pentimento–like the city and the scene that they represent, the band just has so much to offer.

Panic Records is planning a reissue of Wrecked for July 19.