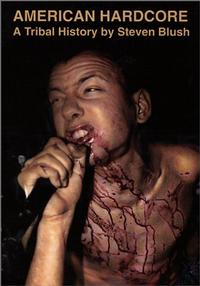 Writing about punk, especially hardcore seems to be a topic that has been passed over by most music writers. You see tons of books about the early days of punk and bands like the Ramones, Clash, Sex Pistols etc..(if you believed what those books said or VH1, punk ended they day Sid Vicous died), but very rarely do groups like Black Flag, Dead Kennedys, Minor Threat, and the hundreds others that followed in their wake get any coverage from a mainstream media. American Hardcore sets out to fill the missing piece of history that was the hardcore scene. This is an oral history of the scene as told by the author, who was a D.C. promoter and played in a band called No Trend, and interviews done by the author with the people created hardcore. He talks with some of the biggest names in the scene including: Milo Aukermen, Brian Baker, Jello Biafra, Dez Cadena, Glenn Danzig, Greg Ginn, Greg Graffin, Jack Grisham, Brett Gurewitz, Ian Mackaye, Mike Ness, Henry Rollins, Mike Watt, and many more both of larger and smaller bands spread throughout country. This personal accounts and the telling of many private and unknown stories gives the book a very intimate feel and by the end, I felt as if I understood some of the frequent contributors better and was better able to understand some of their more personal lyrics and songs.

The book is divided into four parts, each with its own chapters. The first part takes a look at why hardcore happened, what were the major influences within and around the scene that prompted it to react the way it did. It discusses topics such as violence at shows, the (rightful) hatred and distrust of the police, racism and sexism in scene or more specifically why it was predominately white and male. It also talks about some of the homosexual people that helped create hardcore. The book also talks about things like straight edge, anti-fashion, people coming from middle class suburbs and stuff like that.

The second part is definetly the best part. This part was about the bands and the scenes from all over the country. The best thing is that this book isn't all about the west coast or the east coast, the author attempted and made a really good effort to cover every scene from every area around the country. Some scenes and bands get more attention than others; Black Flag, Misfits, and Bad Brains each got their own chapters, and California was divided into 3 chapters, while others barely get a paragraph. When he does do the chapters on the scenes, the author starts with the bigger bands from that scene and then moves down to the smaller groups. Which is cool that he names the smaller groups along with larger ones, it does get tedious after awhile when you have never heard of some of these bands and just want to skip to the next chapter. Also this is my pet peeve through out the book, when he talks about scenes in different towns he always mentions shows his band played, especially if they were with big bands. While that's cool and I would give my left nut to see the Dead Kennedys play in their prime, let alone open for them, it got really annoying after awhile.

The third part tends to drag on bit as it talks about the formation of labels, artwork, the d.i.y ethic, and media portray in movies and TV. I did learn some interesting things in this section though. For instance Belushi was the person responsible for getting FEAR to play on SNL, one more reason he is a god, and if you look during the second performance at the end Ian Mackaye grabs the mic and yells "New York Sucks!"

The fourth and final section is about the demise of hardcore and why after 86 or so it became irrelevant, at least in this author's eyes, as most of the good bands quit or started new projects that were labeled "post hardcore" or "emo". A really interesting part at the end has many of the big names from the scene discussing punk/hardcore and its relevance today, and how today's scene differs from then. While some comments sounded elitist, I will give them credit that being punk during the time period 80-86 was a lot more dangerous than it is now, I have never been beaten down for the way I looked, or had cops shut down a show with tear gas and billy clubs, in some ways I feel lucky for that. He also includes a discography at the end for almost every band that recorded something, but he limits it to stuff that was only recorded in-between those magic years, or stuff that was done after 86 that the author feels was relevant. Which to me is really heavy-handed, take Bad Religion for instance, under their discography it stops after the "Back To the Known" EP, I would have included "Suffer" which was done in 87 (I think). Same with Social Distortion, with them it seems like they must have quit after "Mommy's Little Monster".

Overall this book offers a very intimate and personal account of hardcore punk between the years 1980-1986. Although at times the author and contributors sound heavy handed as we started this so we are more hardcore and what not, it still is a really enjoyable read, I couldn't put it down and finished it in about a week. If for nothing else the some of the pictures are worth the price of the book alone. Some great live shots and just pictures of people hanging out and being part of the scene are cool, along with the, at times, arty pictures at the beginning of each chapter. (My favorite is called "America" and is a picture of an old worn out chair sitting in front of a busted TV set in a vacant lot). I think that anyone who is a fan of older punk bands should check this out, it gives some great background on your favorite bands and introduces you to some that time has passed over. I know I have been trying to track down some of these bands after reading about them to listen to them.

One Inch Punch: Lost In What We Lack