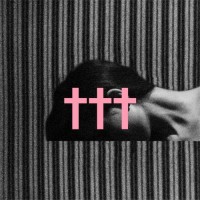 Six months later and Crosses (†††) are back with their second self-titled EP. Overall the music is rather upbeat for the most part, but then gradually slides into more somber territory in the second half. "Fron†iers" opens up and stylistic changes begin to step out. The drumming sounds more live than before, with their programmed beats taking a break. In this song, as well as some of the others, Chino Moreno takes on a sort of Simon Le Bon approach to his singing. It reeks of Duran Duran, which isn't a bad thing. Add to that distant echoes with post-punk riffs and you have a solid opener.

Track two, "Prurien†," reverts back to the electronic-type beats, but incorporates them into a nice new wavy song that's a bit reminiscent of the Cars. It's perhaps the most welcoming of the bunch. The soaring guitars add a nice layer as well. Track three, "†elepathy," is the highlight and the dividing line. This is the best Duran Duran-inspired song here, which is a given seeing as how Chino sites them as a huge influence. The song begins with futuristic, cyber-punk-sounding drums and webbed lo-fi guitars. There is a nice groove that gives this a somewhat danceable rhythm and stands as a totally separate entity from what Deftones and Far have ever done.

The last two tracks, "†rophy "and "1987," take a nosedive and grind this EP to a halt. They both contain a more haunting feel, with hazy vocals, minimalistic slow burning tempos, and funeral synths. "†rophy" is interesting because it has a quirky, single guitar chime that sounds like it was taken from the song"True" by Spandau Ballet, and "1987" wouldn't be out of place on Kid A, or anything by Mazzy Star.

In the end this EP is more of what Crosses are trying to show us, but in subtle ways. Leaving behind a lot of the shoegazy atmosphere, this EP embraces an '80s vibe and is clever in what it does. Shaun lopez, Chino Moreno and Scott Chuck seem to relish in their tributes, and thus, give a nice insight into what sounds and style make them as musicians. Hopefully a full-length LP is on its way nex†.

Nada Surf: The Stars Are Indifferent to Astronomy