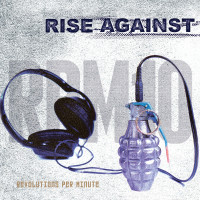 Apologies, I Have None

Sounding like Against Me!'s awkward English cousin, Apologies, I Have None began in 2007 as a two-piece guitar-drum duo that quickly earned a reputation as one of the U.K.'s finest and hardest working acts. After releasing a series of EPs, now a fully grown and distinctive four-piece group, Apologies have finally unleashed their eagerly awaited debut album, London. It has been a long time coming--but well worth the wait.

The 10-song, 37-minute album is outstanding. From energetic opener "60 Miles" to thundering finale "Long Gone," it showcases artful and powerful songwriting that surpasses anything to have come out of the British punk-rock scene in several years. It is crammed with honesty, integrity, anthemic choruses, well-honed musicianship and painstakingly intricate arrangements.

Unlike Apologies' early releases, London was not home recorded. The album was professionally produced by Peter Miles (The King Blues, Crazy Arm) and the benefits of this change are glaringly obvious. Songs like "Clapton Pond," "Concrete Feet" and "Sat in Vicky Park" sound huge--each punctuated with soaring group vocals and epic crescendos that have become staple elements of Apologies' characteristic style.

The band has come so far that, in contrast to its early days, it is difficult to pinpoint obvious influences. Aside from Against Me!, they cite Canadian hardcore act Grade (whose song "The Tension Between Stillness And Motion" provided them with their name), Alkaline Trio and BoySetsFire as inspiration. Ultimately, though, London is out there on its own.

The album is about "life, death, love and lessons learnt," says the band, "a personal and intense account of our experiences over the last few years." Full of layered instruments and occasional mood swings, it is a rollercoaster of a record that takes you along for the ride.

On surprising, sombre piano ballad "Foundations," Dan Bond reflects on the struggles of young adulthood ("I should be old enough by now to stop pulling at my hair and tearing at my skin," he laments). While on guitar-driven, emotionally charged "The 26", Josh McKenzie howls with brutal honesty about suppressing violent thoughts during a relationship gone wrong.

London is one of those rare LPs that provides something for everyone both musically and lyrically. It also starkly highlights that Apologies have far outgrown the insular underground that is the DIY scene. Having self-financed their own releases for a number of years and miraculously remained unsigned, if there is a shred of sense and decency in the cruel and hollow music industry, this album will project them onto a larger stage.

In short: London is an important record that will be one of the best of the year, perhaps even the next five years. Buy it now and let it enhance your life.

Wasted Life: It Means Nuthin When You're Dead