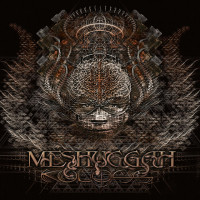 While four years can be a long time in the music world, technical metal act Meshuggah picks up exactly where it left off on 2008's obZen with the new Koloss. Or rather, the band has issued an album that's a direct reaction to obZen. Things here are streamlined, less amorphous and intricate. If obZen can be called Meshuggah's â¦And Justice For All, then Koloss is the band's Black Album, only really monolithic and not shitty.

Of course, certain elements carry over. Jen Kidman's vocals still rumble and grumble out of the speakers. The guitars still crunch. On the surface, this album still sounds like Meshuggah. It's when you get down the details that a whole different metal band comes out.

In recent years, Meshuggah has expressed displeasure over being credited with creating "djent" metal, a genre tag coined from the abrupt sound members Fredrick Thordendal and MÃ¥rten HagstrÃ¶m get out of their guitars. Turns out, they hate most of the band's biting their style. Koloss is the group's least djenty release yet. While these songs do sound like Meshuggah, the guitarists have generally attempted to reinvent their style on this release. Koloss bears more ambient and openly noisy elements than heard on obZen, plus everything from blast beats to hardcore strumming.

The record is also way less technical, focusing on building a groove instead. The result is an album that is as crushing and droning (dig those added keyboard flourishes on "Demiurge") as anything Meshuggah has ever done, while still distancing itself from the band's past ouput. Koloss is an apt title. It's still metal, so it's pretty musically proficient, but per the band's own admission, it's a record designed to be played live, something that didn't come into consideration when Meshuggah wrote obZen, and thus hampered its concerts.

The downside to this change is that, coming from Meshuggah, Koloss seems so straightforward and empty at times. There are so many long ambient moments on this record (the outro to "Break Those Bones Whose Sinews Gave It Motion," the bridge on "I Am Colossus," the entirety of closing guitar piece "The Last Vigil"), and they feel underwritten at times. I'm sure the record will kill live, but in taking a step back from the brink of technicality, Meshuggah hasn't quite found something to balance itself out. Make no mistake, metal can totally have a groove to it, as displayed by plenty of bands coming out of Savannah, Ga. right now. But Koloss right now feels more like a shift than a complete reinvention. The band's next album needs to either go further down the path set by Koloss, or, like a swinging pendulum, head back into the technical metal world.