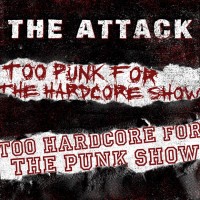 Too Punk For The Hardcore Show, Too Hardcore For The Punk Show (2012)

The Attack is a straight-up smash mouth hardcore punk band from Orlando, Fla. and Too Punk For the Hardcore Show, Too Hardcore For the Punk Show is their first release on Rah Rah Rah Records. The title is a good indication of where these guys are at; they play fast, shouty punk rock not a million miles away from the likes of early AFI, Lifetime and Good Riddance. The band references Agnostic Front and Cro-Mags, and while there may be echoes of the classic NYC/CBGB's sound, the Attack are a more melodic proposition.

The EP kicks off with the belligerent "Wasted," with it's "they don't care" refrain nailing their colors to the flag from the off. The production job is crisp, with massive sounding drums and razorblade guitars crashing in not unlike something you'd hear on a Descendents record. The classic drum/bass/vocal breakdown is present and correct, before racing towards the finish.

Second track "Dr Phillips" is less remarkable, having a distinctly "meat and potatoes" hardcore punk vibe. The vocals screech and wail in the appropriate places, but I find myself unmoved by the "heys" and "yeahs." "Scene Report" is better, blasting out a Sick of It All-esque vibe while proclaiming "we all drift away;" seemingly a damnation of those transiently involved in the DIY scene, a subject many bands have broached.

"Bigshot" continues the lyrical theme; a non-too subtle dig at posers and those with a penchant for "running your mouth", blasting past in just a shade over two minutes. Once again, it's the pop of the snare drum that stands out and the drums sound huge. Drummer Tito Esquiaqu sounds like a beast behind the kit.

Closing track "Time For Living" is a cover of the Beastie Boys' reworking of the Sly and the Family Stone song and wraps things up in a storm of feedback and pounding bass. The shout out of "in the spirit of â88" and the call for unity between "hardcore kids, punks and skins," while laudable, comes across as contrite and somewhat cheesy. The song itself has a cracking breakdown towards the end before speeding up and ending abruptly.

All in, this is a case of "exactly what it says on the tin". It's hardcore in the classic '80s sense, but there's a distinct '90s punk flavor to it also. While it's not exactly reinventing the wheel, this is 10 minutes of fast and furious punk rock that I'm willing to bet is absolute insanity live.

The Garden: The Garden [cassette]