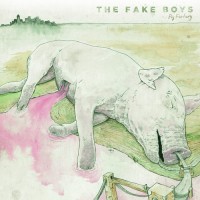 For all their dabbling, the Fake Boys are still very much a pop-punk band. The group's latest, Pig Factory, comes after a string of EPs over the years that plumbed the depth punk with a poppy twist. Oh sure, there's some of Smoking Popes' morose songwriting incorporated, but for the most part, Pig Factory is yet another record to draw inspiration from the likes of Descendents and No Use For a Name.

Certainly, this makes Pig Factory a dependable release. Within seconds of hearing opening number "This is Our Band," you should know what you're getting and how much you care about it. Fake Boys are part of a greater legacy.

But they're not building a legacy for themselves, that's for sure. Pop-punk is a hard genre to innovate, and Pig Factory comes off as utterly anonymous. It's perfectly mid tempo, with vocals that are scratchy without being too throaty. Nothing feels at stake. It's thoroughly inoffensive.

Given their run of EPs, you'd think Fake Boys would have progressed a little bit more than Pig Factory indicates. Right, now, they sound like a decent but forgettable opening band. I don't them much, but got-damn if I could tell what any of their songs sound like. Nothing sticks, but everything reminds me of something else. I take issue with people who say pop-punk is dead (then again, the Fake Boys claimed as such a few years agoâ¦). However, bands like this one don't do much to dispel that notion.