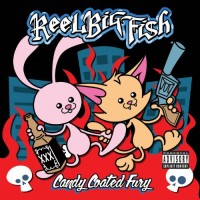 As lame as it might sound, Reel Big Fish holds a special place in my heart for several reasons. Back in grade school, they became my absolute favorite band; I'd spend hours listening to nothing but Why Do They Rock So Hard? and Turn The Radio Off while trying to hide from my parents the fact that a lot of their lyrics weren't very appropriate for a 12-year-old. My very first concert was a Reel Big Fish show. Perhaps most importantly, over the years, the band introduced me to other ska bands, who in turn exposed me to punk bands, and so on, and so on. Reel Big Fish was the band that sparked my interest in music. Thus, it is with a heavy heart that I must announce that Candy Coated Fury, the group's latest offering, well...sucks.

Despite releasing three albums, an EP and a live DVD over the past five years, Candy Coated Fury represents Reel Big Fish's first album of (almost) all original material since 2005's We're Not Happy âTil You're Not Happy. And boy, did something go wrong in those seven years. Perhaps the band spent so much time playing cover songs and re-recording "Beer" for the seventh time that they forgot how to write their own songs? Or maybe the departure of longtime member Scott Klopfenstein took a toll on the songwriting quality? Whatever the case may be, something here is incredibly lacking.

The album kicks off with "Everyone Else Is An Asshole," a song that illustrates just about every problem with the album. In typical Reel Big Fish manner, the song takes angry, cynical lyrics and places them over happy upbeat melodies, a formula the group has employed for years. But this time, the band got lazy. Older cynical songs such as "Don't Start A Band" or "Suckers" were at least somewhat clever or humorous in their lyrics; "Everyone Else" largely consists of the band repeating the name of the song. Over. And over. And over. Granted, Reel Big Fish have always been sophomoric in nature, but at least juvenile songs like "Your Guts (I Hate âEm)" were quick and to the point. "Everyone Else" drags on for over four minutes and beats the listener over the head with uninspired, pointless rage.

And that just about sums up the entire album. Fifty-five minutes of songs about being angry and jaded for the sake of being angry and jaded. While some songs appear sloppier and lazier than others ("I Know You Too Well To Like You Anymore" contains some especially cringe-worthy lines, especially coming from a bunch of guys in their upper '30s), the band never really employs their former angry-yet-clever oddball humor.

Musically, the band fails to throw any curveballs here. In fact, the songs all sound so similar that Candy Coated Fury loses steam quickly. Listening past the 10th track actually becomes more of a bothersome chore than an enjoyable experience. Furthermore, the few musical departures that do appear on the album are so buried amidst the band's mediocre, mid tempo ska tracks that they go largely unnoticed. But, hey, that may not be a bad thing, considering that "Hiding In My Headphones," a reggae track that sounds like Reel Big Fish badly imitating Sublime, may be the worst song Reel Big Fish have ever released (and that's saying something, seeing as the same band released an entire song devoted to saying the F-word).

On the flipside, Candy Coated Fury is not without redeeming qualities. "Don't Stop Skankin'" is a fun, mostly instrumental jam in the same vein as "241" from Turn The Radio Off and the last track on the album, assuming you actually manage to listen that far, features a slow tempo reggae version of When In Rome's "The Promise" that actually proves to be one of the band's most interesting covers to date. However, these two standout tracks can be easily looked over on an album of completely boring, second-rate material.

Look, I won't deny that Reel Big Fish have been on a downward spiral as of late. Their live shows are still enjoyable, but each album seems a little worse than the last. Monkeys For Nothin' and Chimps For Free wasn't as good as We're Not Happy. Fame, Fortune and Fornication was dreadful. A Best Of Us For The Rest Of Us contributed very little to the band's catalogue. But with Candy Coated Fury, the band has hit a new low. The album certainly won't be creating new fans for the band, and for that matter, I can barely even recommend this album to the most diehard Reel Big Fish fans. Blame it on the departure of Scott Klopfenstein, blame it on too much time spent recording covers instead of writing original songs or blame it on too many tours with Goldfinger and the Aquabats. It doesn't change the fact I, a radical Reel Big Fish fan who's probably biased towards the band, felt utterly disappointed by this album. I'm sorry, guys, but when the only decent songs on your new album are an instrumental track and a cover song, it may be time to hang up the horns and do something else.

In-Sane: Trust These Hands... Are Worthless