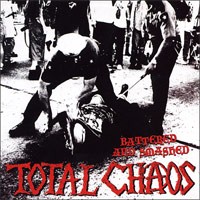 What can be said of Total Chaos that hasn't already been pinned to a leather jacket or posted to a Warped Tour messageboard by some dweeb in his basement?

To be fair, Total Chaos (or "Total Posers" as they've been called by one unnamed Epitaph band after witnessing their alleged prima donna behavior) has done a remarkable job of marketing themselves over the years, despite constant lineup changes, disbanding and reforming. And of course, the fact that they've never been a particularly compelling band musically or lyrically.

Thing is, though, they've always done a decent enough job to keep the punx singing, through a combination of inane slogans and the occasional catchy singalong. On Battered and Smashed it's the album opener "Hooligans Holiday" that holds all the weight, with nothing nearly as good coming thereafter. "Do the Tony" has a pretty enjoyable gang chorus singalong with a nice guitar lead, but other than there isn't much to reason to hit repeat.

"Total Massacre" is a total ripoff of Rancid's "Dead Bodies," "Going Down" is a weak attempt at reggae and "Delirium" is purposefully dumb but bland. There are just too few hooks on songs like "Wake Up America!" and "Waste Away My Life" for any replay value, which both heavily channel Lower Class Brats but without the fun.

Total Chaos aren't particularly bad at what they do, but what they do ain't great. If you really need a street punk fix, get yourself some Swingin' Utters, One Man Army, hellâ¦even Cheap Sex had its moments. This one's strictly for the diehards.