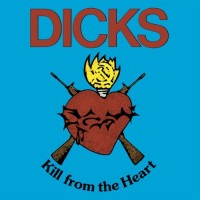 It's interesting that for all the current talk of sexuality in punk rock, some of the earliest groups that commented on sexual politics have been washed away into the ether. Perhaps part of this is because the mid '80s era of punk marked a period where national political discourse ruled, but socio-politics were ignored in face of the current wars and the rise of macho hardcore. Lest we forget that many of the earliest Americana punk groups flagrantly flied their sexuality as talking points, such as Alice Bag, the Screamers, The Germs, MDC and perhaps most importantly, or at least most boldly, the Dicks.

Founded in the heart of the notoriously conservative Austin, Texas, The Dicks were as loud about their sexuality as they were about their pro-communist stance. But most interestingly, while the band eschewed many prominent Texan mindsets, they equally incorporated into their music, with seeming appreciation, Texas' long musical history.

Lead singer Gary Floyd was as bombastic in 1980 as he is now. A large man with a platinum blonde mohawk, he made no ifs-ands-or-buts about being gay. When the band released Kill from the Heart in 1983, hardcore had already developed an anti-gay stance in many places, so the cajones for the band to not only acknowledge, but flaunt their gayness is amazing.

Kill From the Heart finds the band not on the offense of their beliefs, but on the attack. On "Little Boys Feet," Floyd seems to want to affront conservative notions in any way he can, even if he has to be extreme, and finds him begging parents of two adolescents to let him lick their feet in the shoe store. But even more aggressively, is how the band strikes out against the contemporary government. On the title track, Floyd screams "Daddy's boy got some brand new cash / Now you're messin' with REDS / Who are gonna kick your ass!" Then he goes so far as to suggest a French revolution style coup with "You fuckin' pig, death is your fate! / It's from the heart / You need to be shot!"

The statement, and similar ones throughout the album, pose possibly the most radical question of punk in that time. Because the Dicks feel there is social and economic inequality, a quick solution is simply killing the people who are above the equality average. It's not clear if the band actually does want to kill people, but when Floyd screams "You need to be shot!", it sounds like he means it. Thus, the question is, is violence, and even fatal violence, a proper solution to inequality? It did work in Franceâ¦for some people. The band doesn't answer the question, but doesn't mitigate that they are speaking in extremes either.

Equally interesting is how the band mixes the burgeoning hard charge of hardcore punk with traditional Texas music. "Anti-Klan (Part 1)" is a punk thasher, but its licks seem to be based solidly around Southern Blues twisting. Likewise, "Razor Blade Dance" basically is a blues/country number. It should be mentioned that the band covers Jimi Hendrix's "Purple Haze" and purposefully keeps the famous misquoted line "Excuse me while I kiss the sky [or "this guy"]" as muddied as possible.

The duplicity of the band's reverence for the early bluesman and countrymen of the 1900s contrasted with their contempt for pretty much every aspect of Austin makes the album deceptively deep. At first the Dicks seem to be shouting slogans with little thought, but upon introspection, the puzzle of their sincerity and contempt becomes more and more complex.

After Kill from the Heart Floyd moved to San Francisco, formed a new version of the Dicks, and released These People on alternative Tentacles in 1985. While These People retained the hardcore chopping of their earlier releases, the blues/country elements were exchanged for a more proto-grunge tone. "Sidewalk Begging" is nearly as massive-sounding as heavy metal, and finds the band slogging along in a threatening Flipper/Melvins-like vibe. Similarly, "Dead in a Motel Room" finds the band spreading out into an extended jam. Where they used to smash out tunes in a minute-thirty, now, four minutes was no problem...and it works.

The biggest contrast between These People and Kill from the Heart is that where the lyrics used to project outward, now the songs are much more introspective and intimate. Instead of threatening to kill rich people, Floyd moans "I'm feelin' bad / I'm feelin' down." Still, he again confronts issues of sexuality with "Off Duty Sailor" where he recalls from the perspective of a sailor a repressed homosexual experience.

While Kill From the Heart was more savage, These People is more of an album. Songs have different cadences and sections. Instead of blasting out riff after riff, the Dicks allow the music to drift, particularly on "Doctor Daddy," where the band foretells the introspective volume of bands like Dinosaur Jr. and the Meat Puppets.

Around 1985, both hardcore and experimental punk had begun to be absorbed by indie rock (or become a caricature of itself). And so, the Dicks ended soon after These People. Unfortunately, somewhere their legacy got washed away except for in short bits in documentaries. The reissues bring light back to one of the very first bands to address such dark issues while retaining a tongue-in-cheek attitudeâ¦I mean, they are called THE DICKS for goodness sakes.

Strung Out / The Darlings: live in Cambridge