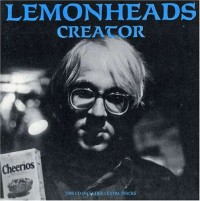 Through the gift of hindsight, Creator can be viewed as the first step towards greatness for Lemonheads. They were still a few years away from It's a Shame About Ray, but the same ramshackle melodies and tossed off lyrics that would make them critical darlings in the '90s can be heard on this '88 release. Granted, there's also some other dude besides Evan Dando singing and a cover of "Plaster Caster" by Kiss thrown in, but that's part of the charm.

Dando, or the Guy Who Sings Lemonheads Songs You Know, doesn't show up here until track three, "Clang Bang Clang," but the other vocalist, Ben Deily, certainly holds his own. His is the punkier of the two voices, which suits the style since Lemonheads were arguably still a punk band at this point. Deily gets in some snotty shots before dropping the heartfelt acoustic number "Postcard." Maybe it's the sequencing, but this feels like his record, especially given the prominent placement of punky tunes like "Falling," "Two Weeks in Another Town" and opener "Burying Ground."

Still, it's what Dando would go on to do that probably brings most people to this record in the first place, and his presence here is compelling in a sort of academic way. Nobody shits out a melody like this guy; it all seems so effortless on cuts like "Out," "Die Right Now" and bonus live track/Suzanne Vega cover "Luka" (later recorded for Lick). His voice is a little rough and he doesn't contribute anything on par with, say "Alison's Starting to Happen" or the so-tossed-off-it's-awesome "Big Gay Heart," but he's still unmistakably Dando.

Creator was the last true effort from the band's original lineup. While Deily would contribute to Lick, he ultimately quit the band for good five songs into recording. Perhaps the best example of how quickly Dando cycled through band members can be illustrated by the inclusion of a radio interview with guitarist Corey Loog Brennan on Creator's CD editionâdude didn't even play on the record, and he was gone within a few years anyway. But while Lemonheads post-Creator pretty much became a Dando backing group, that doesn't negate how catchy their records got. Creator showcases both the dissolution of Lemonheads proper and the rise of Dando as a songwriter.

The Dicks: Kill from the Heart / These People [reissues]