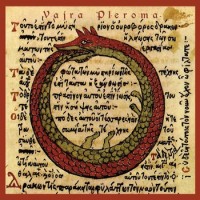 Annamaria Pinna, vocalist and keyboardist for Vajra, has a condition called synesthesia, which means that to her, certain sounds correlate to certain shapes and colors. While it might be too easy to say that her condition translates directly to her music, Vajra's debut LP, Pleroma, seems to draw correlation between underlying feeling, sound and time period, regardless of the cultural genesis of either.

Most interesting is how the album itself can have different sonic interpretations. Were it to be released in the mid-'80s, one might say that it has new age tendencies. But, in 2012, its hallmarks are nearly drone metal. Based around a soaring, but heavy low end, the album draws from the introspective mass of thick stoner rock like Sleep and OM, but doesn't have the nasty edge of most metal bands. Rather, despite its massive, hypnotic grooves, the album isn't aggressive, but soothing, suggesting more introspection and less outward projection.

Pinna says that she wrote the album after returning from India. Indian tablas and rhythms merge with what is undeniable British-doom riffs. The combination does resemble OM's Good is Good merging of the Eastern and Western. But, where Cisneros' voice drops to an almost robotic unfeeling trance, Pinna embraces emotion, and calls out in equal parts opera and pop vocals.

Blake Fleming, an original member of Mars Volta, handles drums, and like Mars Volta, there are certain space rock explorations. "India," unlike other more standard tacks, is a drum-less, ambient drone that starts with a blowing wind and has a sinister rumble that grows in color and size. While the sound isn't necessarily anchored to ay culture, it would seem that in any region, a certain mass and transience is attached to the sound, despite its absence of vocals.

Often, when merging the East with the West, musicians make the mistake of being too direct and make it seem that they are using Eastern sounds to be more "deep." That's not the case here. Rather, instead of bringing in Eastern elements to Western drone in order to add a certain ethereal quality to the sound, it seems as though Pinna is showing that like colors, certain tones evoke images, despite their geographic origin. The trick is difficult to pull off but the band mostly succeeds. Yet, as trippy as this album gets, it makes one wonder that now they've mastered sounds from across the globe, their real leap might be when they start creating sounds that no area has heard before.