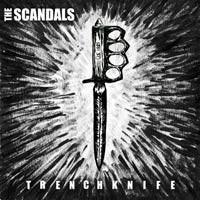 The Scandals are very much a modern New Jersey punk rock band. Basing their sound on an energetic, melodic three chord rush, the band sings with gruff voices about socio-personal relationships in the abstract.

The group's New Jersey roots shine through on their deftness for story telling. On "Trenchknife" the band speaks in that combination of biblical and and street rat knowledge as developed by the Boss with lines like "Cause you can't see you, without seeing me / We're all just trench knife kids / Fighting hand to hand, like our fathers did." Wisely, the band doesn't overplay either its nostalgia nor does it over tell the story. In the post-Gaslight Anthem age, bands are basically putting mousse in their hair and reading from novels. By contrast, on "Jersey Sweep" the band describes a stressful situation by delivering just enough information, which gives the song specificity without choking down every single meaningless detail, "Everyone gets down / Nothing matters except all the ones who stick around / From the first show til the last note / All I wanna know, do you wanna go?"

The record gets most interesting on its last track, "The Glow." Casting judgement, or at least analysis, on an unnamed sufferer, the band increases the intensity of its warmish rhythm and strikes hard on the strings, giving the song a vengeful strike while singing "whoa" after "whoa" in the background, almost mimicking Gospel.

The band has mastered the modern, gruff, emotional sound and as their last track shows, they are developing into something more interesting beyond their whisky-voiced contemporaries. Still, what does it say that they are at their best when they are being nasty instead of relatable? Perhaps it's time for melodic-gruff-punk to have some villains?