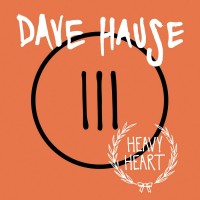 I don't mean any disrespect to his solo full-length debut Resolutions, but Dave Hause has completely supplanted that record by rerecording its songs with stripped down arrangements. As if that wasn't enough, he's releasing these new versions on a series of 7"s for different labels and throwing in a couple covers from their respective vaults. Yeah, there's some assembly required, but it's all worth. Heavy Heart, Hause's effort for Jade Tree, is arguably the best of the bunch.

"Heavy Heart" and "Rankers & Rotters" absolutely sound better here compared to their Resolutions counterparts. With just electric guitar and vox, "Heavy Heart" actually carries more oomph this time, and the chorus hits much harder. But got-damn does "Rankers & Rotters" kick ass. Armed with just an acoustic guitar, Hause drops a whole mess of fury through just his voice. Not to turn this whole article into a backhanded compliment, but these songs are so much better solo. Call it "the Mountain Goats Effect."

Hause has proven himself an adept interpreter in the past, and he delivers yet again here with covers of the Promise Ring's "Skips a Beat (Over You)" and Jets to Brazil's "Psalm." He could have taken the easy way out and dropped a couple of winking Kid Dynamite 'n' Paint It Black covers, and instead offers up two quiet, contemplative sucker-punches. "Skips a Beat," in its original form, is a peppy, poppy number, but Hause goes the other way with it. Here, he finds the solemnity in Davey von Bohlen's words, turning the track into a sort of pledge of fidelity. The Jets to Brazil cover is nearly as good, although not quite as surprising. Straight piano, just like the original, minus the drums and audio bits. Still pretty awesome all the same.