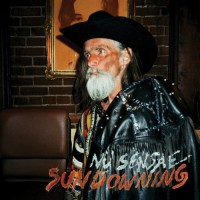 I'm really wondering what it is that the Canadian water has in it that accounts for the high quality of music coming out of that country, specifically in 2012, and NÃ¼ Sensae have upped the ante on much of what I've already fallen for this year with this the band's second long-player. In terms of personnel, the band has expended to a three-piece, clearly amping up the frenetic noise that NÃ¼ Sensae emits as well as adding new dimensions.

"First Born" is nothing more than some lightly played guitar but it's almost there as the anti-statement of what is to follow (it is also reprised just before the penultimate track). "Swim" comes in with a fairly straightforward riff before melting into one hell of a two dimensional track with a hardcore/melodic noise approach being delivered highly effectively with Andrea Lukic's vocals going from that of a wailing banshee to something more akin to that found in a shoegazer band, being found deep within the music rather than providing the main focus when it cuts loose. And that approach really says all you need to know about NÃ¼ Sensaeâthere's noise, there's melody, there's screaming and there's some (spoken) singing that features almost beneath the music. Take any number of combinations of those four elements and that's what you will hear on this album.

With Daniel Pitout drumming as if not only his but a thousand other lives also depended on it and new boy Brody McKnight producing great big riffs along with some warm scratchy guitar solos that owe some kind of debt to Dinosaur Jr, this provides the perfect frame for Lukic to pummel her bass whilst channeling the twin vocal delivery that she has down to perfection: and in doing so conveying how massively pissed off she must be as these are songs full of anger more than anything else because nothing else could account for that guttural voice.

I don't see the need to dissect all the songs on here, but will say that this is one hell of an album and I can see (and hear) why they seem to be friendly with another Vancouver band, White Lungâboth bands seem to have the same innate desire to destroy everything and everyone in its way using a full on musical confrontation. What makes both bands work so well is that the chosen line of attack does not sound limited and although there is an inherent primitiveness to the balls out approach, both are able to add that something extra to the blistering fury that retains ones interest. On top of that fury delivered by Lukic and her cohorts, is the cohesiveness that allows this record to maintain its course, ensuring a tight yet unrestrained whirlwind to prevail, picking you up, shaking you around and enticing you into holding on for dear life as it continues.

"Burnt Masks" is a true gem of a song, taking everything to the extreme to produce something that has the ability to soothe as much as it obliterates. "Whispering Rule" is a track of mammoth proportions, building through a lengthy instrumental opening into another aural assault. The really weird thing about this whole record is that I find it extremely relaxing to listen to when going to sleep!