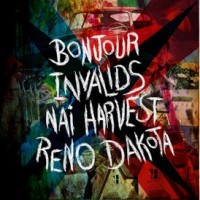 This transatlantic emo four-way split 7" is the latest release from U.K. indie label Enjoyment Records and brings together two fine acts from both the U.S. and U.K. The record itself comes in a limited run of black and colored wax, the latter being a pretty splatter-painted affair. Both countries are strongly represented, although I'd hesitate to use the words "squaring off", being that this is a quintessentially emo record.

Bonjour from Philadelphia are first up with "The Spice Must Flow!" and it is the kind of mid-paced lo-fi indie jam that we on this side of the ocean imagine fills basements across the eastern seaboard; introspective guitars meeting hollered shout-a-long vocals with suitably earnest lyrical proclamations of "I love you but I hate this" ticking all the right boxes. The production is warm with chiming guitars cutting through and the multiple vocals adding depth before things breakdown with gang-chants and more graveled vocals towards the end. This is a good song that's probably a riot in the basement with a PBR in hand.

Invalids are next and are a very interesting proposition; the two members live on opposite sides of the country (Pennsylvania and Oregon) and have never met each other in person. Whilst cross-country collaborative work is nothing new, this is the first time I've heard of it in such circles. However, it works and considering the guys met on tabit.net, this track unsurprisingly features some prodigious guitar/bass wizardry. "Monary System" starts out with hand claps and sing-a-longs, things twist into noodle-territory before settling in with full-hearted melodic vocals. Interestingly, juxtaposing the technical skills displayed, this is probably the most straight forward "pop" song on the record. From bass tapping and programmed drums to soaring vocals and incredible guitar playing, there is a lot going on in this song. Thankfully, it's never overtly self-indulgent and is over all too quickly.

Nai Harvest, a two-piece from Sheffield, England, is first up on side two with their song "Red Letter Day, On Play (#2)." These guys have been favorites within the U.K. DIY scene for a while, having earned their reputation through hard work and writing great songs. Nai Harvest make a lot of noise for a two-piece but demonstrate a keen understanding of dynamics. The prerequisite quiet/loud parts are in evidence, but it can be tricky to pull off with only guitar, drums and vocals to play with. Again, as appears to be a staple of this record, the guitar work is of a very high standard. The vocals could strip paint. I mean that in the very best way possible; the emotion and desperation is palpable with every syllable screamed. One of the U.K.'s best, these guys are worthy of your attention. Kudos for the Get Up Kids reference also.

Rounding things out are Reno Dakota from Cambridge, England, who offer up "Yeah, I'm Stalking." Slightly creepy song title aside, the song also starts with a slightly creepy sample before kicking into a minor chord stomp. The vocals are distinctly English, immediately bringing Frank Turner to mind–no great surprise given their location–and bring a sense of bitterness with phrases like "You have friends in all the right places" jumping out at the listener. The song takes a tangential shift in the middle eight before coming back in a torrent of wild drumming, shimmering guitars and soaring harmonized vocals. This track is probably the best produced of the record but while the musicianship is great and the production crisp, I can't help but feel that the song is the weakest of the four on offer, seemingly going more for epic sound than epic "feel."

All in all, this is a great little release that highlights a range of flavors in the current DIY emo/indie scene. If I was to use a sports reference, I'd say that we've ended up in a tie. If fun yet introspective emo jams are your bag, then you'll definitely find something you like here.

You can order the record from Enjoymentrecords.com or stream it here.