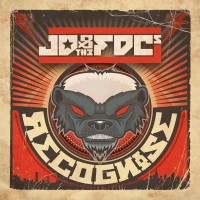 The JD in JD & The FDC's is Jamie Delerict, a man who seems to have quite a musical past according to his Facebook page, having been in a number of bands including the Dangerfields and Panic in the UK. The FDCs are, well, not really sure really and to be honest, I'm not really too bothered to find out having listened to this album.

Firstly, this album comes with a whole list of people who have contributed to the record including the likes of Dez Cadena (some band with a famous logo), Richard Bacchus (D-Generation), Jesse Luscious (Blatz etc) and a handful of other "names" in the rock/punk scene. To me this seems like quite a desperate ploy to entice the listener into thinking that with all these seals of approval this is a damn fine record. Well, I wasn't enticed by those providing contributions and it shouldn't need them so blatantly pushed to make a good record but then this isn't a good record.

For me, Recognise is a tired rehash of well used rock ân' roll riffs, filled with uninspiring lyrics that really someone of a certain age (JD, the finger points at you) should find too decayed to even contemplate using rather than ramming them all into one album. My immediate thoughts are that this is a sub-sub-par version of the Wildhearts but I don't think it's fair to use that band's name in any comparison, good, bad or otherwise. Although the main thrust, musically, is one that is more rock than punk, JD and the FDCs do at least try and mix things up a little bit and "From The Shadows," featuring Cadena, and Amy Dumas does have a neat opening riff but it doesn't take long before we descend firmly back into the pool of mediocrity. I won't deny that there is something catchy about some of the tracks but it just sounds so stale and obvious that I cannot get into it at all.

I'm not one for lambasting a record just for the fun of it as bands have usually put a lot of effort into the work but this just manages to wind me up in so many ways, from the lack of originality in terms of the music and lyrics, the slick artwork/inlay (all of which reminds me of something else) and the awful photos of the band included in that packaging. However, this has been sent to me to listen to and in doing so has offended me into writing over 500 words when I could have turned in about fifty or so and got my point across in an equally forceful way.

Believe me, I've not just listened to this once and thumped away at the keyboard with this negativityâI've played this more than I really wanted to in an attempt to find something I liked, but that has not happened. I have found positive reviews of this album, so there is no doubt an audience out there for this kind of stuff but it certainly doesn't include me.