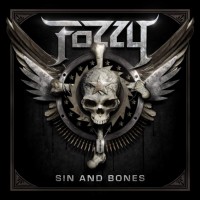 Do you love your sister? Do you own a muscle car? Are you racist? No? I'd advise leaving this review and going to listen to a completely different band. If possible a completely different genre. However if you are a sibling loving, muscle car driving, xenophobe let me introduce you to a band called "Fozzy." For those that don't know Fozzy is fronted by the "world famous" wrestling "sensation" Chris Jericho (the dude with long blonde hair who does that cool shit with the other guy's legs). Sin and Bones is the band's fifth effort (apparently) at conquering the music industry and taking the world by storm.

The album starts off with a song named "Spider In My Mouth," which ironically starts off with the nursery rhyme "Incy Whincy Spider;" totally didn't see that coming. All sarcasm aside this song is by far the strongest track on the album. It has a catchy chorus and a pretty good riff and well, that's about it. However once you get past the first song the journey takes a turn in the wrong direction several times, shoots you through the windshield, then runs you over in the momentum of goddamn awfulness the size of Hulk Hogan's steroid-fed alien arms.

I don't really get this band. I can't find any unique selling point throughout the album. After it finishes I'm not asking for more and I can't recall how any of the songs go. It makes me wonder are there any real Fozzy fans? I don't know any and that's me being totally serious. I think the main problem with this band is that there are 100 other bands doing this sorta stuff but 10 times better. Nickelback for example; they have the whole arena rock thing down to a tee. Another example is Disturbed, a band who have big guitar riffs but can still sell records. Now I don't particularly like either of these bands, but they are doing their own thing. Sure it may not be 100 percent original but they are still doing it and what they do they do well. Fozzy on the other hand...not so well. I will say again, there is no need for this band.

The American Scene: Safe For Now