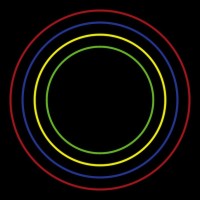 At this point, it's pretty much a given that Bloc Party will never replicate Silent Alarm, but with the disappointing new Four, one wonders if they even have another Intimacy left in them. The record attempts to continue Intimacy's bombast while still honoring the group's early, tense stabs at post-punk, but the results are less than compelling. Maybe those break-up rumors should have come to fruition.

Four attempts to be everything to everyone, and in the process fails on all counts. Intimacy wasn't the band's best moment, but at least it was loud and fun. Here, any attempts at noise come off as grunge lite (especially on the regrettable "Coliseum"), dampening guitar squalls, drum breaks and even Kele Okereke's mighty vocals. The rock songs simply aren't raw enough, closer "We Are Not Good People" aside.

Oddly, the strongest tracks don't even try to rock. Lead single "Octopus" eventually gets too repetitive, but for the first two minutes or so, it's a catchy lil electronic number, even if it does come off as too compressed. "Real Talk" cultivates a nice atmosphere, as does "Day Four." But even in their quietest moments, Bloc Party still used to know how to dole out the choruses. Not so here. Four's songs have a somewhat mechanical path, without the breathless breaks and triumphant surges that once defined the band's output.

Give Four credit for its extremes; it's arguably the most diverse Bloc Party record to date. But it's also got that whole "Jack of all trades, master of none" thing going on. And while it covers the band's different sounds from over the years, it's hard not to just go directly back to those songs instead. This band used to be better at dance beats, needling guitars, love songs, balls out shredders, etc.

Braid / Owen / TS & the Past Haunts: Live in Pomona